My staraptor's name is Rui, after the Collesium teammate, My luxray's name is Static, for obvious reasons, my riolu's name is Balmung, after one of my favorite characters in the .hack series, my roserade's name is MiMi, my rapidash's name is Epona, after Link's (from Legend of Zelda) horse, and my mismagius Shadow, named after Sega's character from the Sonic series. I also have a ninetails named Kyuubi, named after the nine-tailed fox spirit from the Naruto series.

I typically don't do nicknames, but I have a few.

Metagross - Mechanica, because it's cool.

Kadabra - Mindflayer (Fits his theme) oh, and is there anyone willing to help me turn said Kadabra into Alakazam?


And that's all I can remember.
J

Let's have a toast

In-game team:
Empoleon - "Reignguin". Reign because it has that crown thing going on and it sounds like "rain", which relates to its Water type, and guin comes from penguin. Horray for cheesy puns!
Luxray - "Mufasa". You have watched, or at least heard of, the Lion King at some point in your life, right?
Staraptor - "MukuBIRD". Because everyone loves Muku.BIRD. and I wasn't feeling overly creative. And yes, I know that techinically it should be Muku.HAWK. by now.
Lucario - "Wile E.". Because the coyote & roadrunner cartoons were the best parts of Looney Toons.
Skuntank - "Pepe LePew". Like I really had any other choice for a skunk after naming Wile E.
Honchkrow - "Provenzano". Because I was looking through a list of mafia people on Wikipedia and this name looked good.

Legendaries:
Giratina - "Thanatos". From the Greek personification of death/mortality.
Latias - "Tiamat". Goddess personifcation of the sea/monsterous embodiment of chaos/dragon.
Cresselia - "Glinda". Because I am a minor Wicked geek.
Registeel - "Crius". One of the Titans.
Regirock - "Nisroch". A god of agriculture or something. I don't remember why I named it after that, to be honest.
Regice - "Hod". Killed Baldr in Norse Mythology. I don't remember why I named Regice this either.
Uxie - "Enki". God of intelligence and a few other things in Sumerian mythology.
Azelf - "Menthu". Egyptian god of war. Most likely named that because Azelf is living hell to catch. If I recall right. Yes, I'm horrible at remembering why I named things unless they're obvious.


I've nicknamed a few other Pokemon, but none of their names are particulary interesting, other than Skulkraken the Gyarados(and as much as I'd love to take credit for that metal-sounding name, it was just what Gyarados was originally going to be called in English).
S

Torterra: A'Tuin - In Discworld, it's the turtle that carries the world on its back.

Ninjask: La Mojca - A misspeling of "La mosca", meaning "the fly" in Spanish.

Medicham: Zas! - Comes from a Family Guy episode in Spanish where Peter said "Zas! En toda la boca!" (that's "Zas! Right in the mouth!", I'll check to see what he originally said in English).
Edited: Found it. "Pow! Right in the kisser!", a reference to Jackie Gleason.

Lopunny: Travelo - He was a male Lopunny, you can guess what "travelo" means then.

Seeing Arcane Mind's pokemon nicknames and his World of Warcraft Blood Elf mage avatar, is the name 'Mindflayer' referring to the Mantle of the Mind Flayer from Karazhan?
http://www.wowwiki.com/Mantle_of_the_Mind_Flayer
D

I apologize in advance if my post is inappropriate, but some off the top of my head I can think of are:

Infernape: Mr.AssBurn (his butt is on fire as Chimchar)
Luxray: Slut (Shinx reminded me of a friend's kitten with the same name... sadly)
Stunky: Butthole (I dunno, it's a skunk)
Noctowl: Buttowl (I hate it)
Dusknoir: Um... (seriously, what is that thing)
Raichu: Fat-Slob (I hate Pikachu, at least from the anime)
Geodude: Geojerk (it's annoying)

Yeah I know, I'm really mature... but at least I laugh when I go through my boxes. :/
I

Infernape- Convoy, Optimus Prime's name in Japan
Staraptor- Deftwing, named for an Autobot Lightformer
Roselia- Rosanna, a Japanese Autobot
Gastrodon (Western)- Seasaur, one of the dinos that helps form Magmatron
Vespiquen- Glyph, the name of a BotCon exclusive mini-bot
Palkia- VectorPrym, a shortened version of the name Vector Prime
Azelf- Stardust, a (slight) play on the name of a Sparkbot

See a pattern here? Yep, most of my crew gets Transfomer nicknames. And no, I don't think I'll run out of names anytime soon. :lol:
S

Why do I get the feeling you watch NGE?
N

Mine are real original. lol

I named mine after Detective Conan characters.
PKMN Emerald:
Taillow-Conan
Minun-Ran
Plusle-Sonoko
Kirla-Haibara
Marril-Heiji
Bellossom-Kazuha
Mightyena-Gin
Shroomish-Vodka
Skitty- Kaitou Kid
I mainly named them for colors matchi ng their characters or looks. like Shroomish, it looks like Vodka becase it is fat! Another odd fact is that they are all gender switched except Heij. Lol.
R

I alway name each and very one of my pokemon...most of the names have no meaning became I just put sound the sound good together like with Nagemi

ya and you'll notice there mostly Female...don't ask I alway seem to catch female even with out wanting to

Natsumi-Female Lucario (I forgot what it exactly means)

I named my Dialga TARDIS. Yes, I know it's cliché. 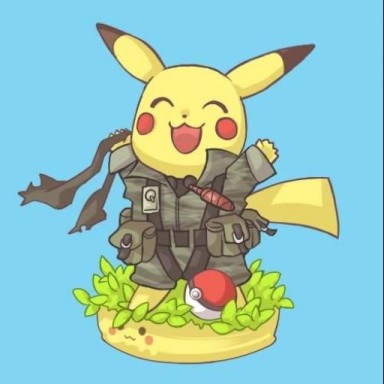 lord of the sword

Heres my team and why I called them their names
Species: Charizard Name: Robert Reason: because one of my friends favorite pokemon is charizard so I named it after him.
Species: Infernape Name: Fire ace Reason: I just felt like calling it that
Species: Swampert Name: Mudy Reason: I was being childish the day I got saphire so I called my mudkip muddy
Species: Dialga Name: Dialaga Reason: It was how my freinds and I first pronounced his name
Species: Palkia Name: Pearl Reason: I just thought he's from pearl so why not
Species: Blaziken Name: Fighter Reason: I just felt a little 8 bit that day
Last edited: Nov 4, 2007
E

I'm not TOO creative with nicknames, but I do like them.

Espeon - Jade (just thought it was a pretty female name, and I was happy to have a female Eevee to evolve into Espeon)

Umbreon - Grievous (after General Grievous, and I love that name. Seem like a good dark type name to have)

Ampharos - Chief (kind of random, but I just thought it was cute)

And I have yet to think of good nicknames for Typhlosion and Swampert.
T

Friend of the ABC

I once named every Pokemon I got after a figure from the French Revolution. It was quite entertaining. I thus ended up with the likes of Saint-Just the Arcanine, Mirabeau the Snorlax and Louis XVI the Psyduck. >
B

I need a Ditto so I can start breeding

I havnt been to the leage yet so I cant get them in my game. I also dont have any fancy pokemon to trade.

any help would be appreciated
B

Master of Dragons in tr.

My nicknames are fairly stupid, just words that sound good together.

Here are a few examples of mine:

Short for pochama, and I thought that sounded better then piplup.

Skuntank (I forget the gender) Toxspeed

It was going to be toxspeeder, but I got distracted, and put down toxspeed. It's a poison/dark type, and it's nature increases speed.

Was the first pokemon I caught. 'Uno' is spanish for one.

And finally, in my last slot, is the pokemon I am training.

This is my party that I use for everyday purposes, like catching low-level pokemon, battling the person in jubilife city, and such. I use different teams for elite four.

Here are some more.