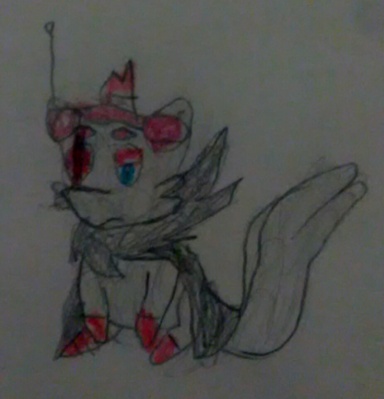 Trainer Name: Shadow
Gender: Male
Personality: Playful and cunning at the same time, Shadow has a lot in common with his first Pokemon, Mischief, and his preference for Dark types makes itself apparent through his immense knowledge of them. He's proficient at disguises, but rarely bothers. His skillset and preference for Dark types leads some to wonder if he's somehow part Zorua.
While he's a fairly nice guy, Shadow is nevertheless a prankster and finds it amusing to drive friends and foes alike up the wall. However, he's loyal to a fault, and is unwilling to let people bully him, his Pokemon, or any human friends he makes.
He's never seen without his beloved first Pokemon, Mischief, and is quite protective of the pup.

Shadow's Stuff​
x1 Backpack: A place Shadow keeps all his stuff while out and about. It's Zorua themed like all his clothes.
x1 Pokedex: An ordinary red Pokedex. Will be customized later.
x1 Mega Ring: A Mega Ring, will be replaced with a custom accessory when Shadow gets the chance to Mega Evolve something.
x1 Z-Ring: A Z-Ring, will be replaced with a custom accessory when Shadow gets a Z-Crystal.
x1 Fishing Rod: An ordinary fishing rod, good for hunting down Water types.
x1 Berry Bag: A carefully constructed bag for holding Berries, useful for obvious reasons.
x1 Pokeblock Case: A case for the storage of Pokeblocks. Shadow will start working with it when Contests start back up.
x4 Pokeballs: Ordinary Pokeballs design to comfortably encapsulate a single Pokemon (or item, in some cases). It's designed as a capsule system.
x5 Rare Candies: An energy packed treat powerful enough to raise a Pokemon's level by 1.
x1 TM Return: A TM for the move Return, which is stronger the more the user likes its Trainer.
$3050 Pokedollars
Last edited: Sep 29, 2019
You must log in or register to reply here.
Share:
Facebook Twitter Reddit Pinterest Tumblr WhatsApp Email Link
Top