DearEagleZ and her (mostly) Fakemon Blog 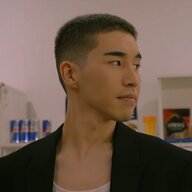 Since I've made a few Fakemon before (but never really told anyone about them) I decided to make a blog about it. Some of these will be fairly old, others made up on the fly, but in the end, you'll mostly see Fakemon and Fakemon abilities and items (or perhaps even dungeons)

Just before we start, the only rule here is that if you do use any of my stuff here, please credit me (whenever possible.)

I'll start with one Fakemon evolutionary line that I made (a fairly old one) that consists of a regional Meowth and its evolution Perswipe.
This regional Meowth is a Normal-type (I know, not the best decision, but now that I think of it Psychic-type might be a good secondary) that was 'made' through selective breeding. I see it as having similar eyes to those of Alolan Meowth and Espurr, a somewhat fluffy coat that is a whitish color, and a silver 'coin' on its forehead.
Perswipe is this Fakemon's evolution, becoming Psychic-type. The 'gem' on its forehead is actually its third eye, which it uses to focus its attacks and to predict the future. I didn't have much of an idea as to how it might look, but I feel that its eyes would be a mix of Kantonian Persian and Meowstic, with a very fluffy light mauve coat. The gem's color would vary significantly, as would the eyes. It'd remain a quadriped, but can stand up to some degree (if you couldn't tell already I'm basing its looks on the Espurr line as well, even though that wasn't my original idea).

That'll be it for now (it's getting a bit late and I have work to do), but I'll try to post tomorrow.

So today I decided to use two generators to give me a prompt (this item generator and this animal generator) to make a new Fakemon. I'll try to make two today, plus a few moves, so let's start.

For this first Fakemon, I got a tennis racket and a blue crab... OK, seems somewhat normal.

This first one is Krabbit (which is distantly related to Krabby and Kingler), the Racket Crab Fakemon. A pure Water-type, it stands at 1'06 and weighs around 16.8lbs. Its racket-like claw is often used to defend itself, but it also uses it as a sort of net when it wants to catch food. They often form pairs and compete against other Krabbit in a game similar to tennis. Given that it's partially based on a blue crab, I thought it'd be nice to have it be a blue color, with its four legs being a beige color. The claws would be a slightly paler blue, and it'd have one small spike on its upper half.

I feel like this Pokemon's signature move would be Serve Up (based on the tennis move and is not related to Order Up). This would be a Water-type Physical move with 10 PP and 80 base power (with 80 accuracy), which has the added benefit of reflecting most ball and bomb moves back at the target.

The second one is based on incense and a vicuña (which is related to the llama).

I couldn't come up with a name that made much sense so I'll just go ahead with the description. Known as the Scent Fakemon, this Grass-Fire type is often covered in aromatic smoke which it can barely smell, which confuses any pursuers and may result in a temporary loss of smell. If a predator is close to their herd, one or several of them will emit a loud but clear whistle-like noise to warn others and to scare the predator off. Its coat, like that of the vicuña, is fine, soft, and lustrous, but similar to incense, it releases aromatic smoke when set on fire, the scent of which varies by area and diet, which makes it useless in making clothing. Its coat is also often in various shades of purple and grey, which, again, varies by area.

This one's signature move would be Smoke Bomb, which unlike what its name may suggest is not a bomb move. It would be a Fire-type Status move with 15PP and 100 accuracy that targets the user. If the user is hit by a move that is strong against Grass-types or Electric-type move while using the move, the attacker's accuracy and Speed is lowered by 2, and it if a multi-strike move is used, each hit activates the move.

Finally, even though this might not become anyone's signature move, I think an Electric-type OHKO move would be nice to envision. Its name would be Voltage Overdrive, with 5PP and 30 accuracy. This move would be similar to Discharge in that it targets everyone. The user would shoot out a massive flare of electricity to strike everyone in battle, but because it strikes everyone this might be limited to a single evolutionary line.

Anywho that's it for now.

Ok so I decided to make a few new moves (like 7 of them) and this time I decided to use a name picker (wheel format) because ?
I managed to get these ones:
In addition, because the wheel decided to give me 4 status moves, I decided to go with 2-3-2 (that is to say, 2 special moves, 2 physical moves, and 2 status moves)
Ok, so let's start.

This first one is a physical Rock-type variation of Bullet Seed called Pebble Pelt, with 25 base power, 30 PP, and 100 accuracy. It pretty much does the same thing as Bullet Seed but with pebbles.

This second is a physical Fire-type move called Flame Spear, with 80 base power, 10 PP, and 85 accuracy. The user rushes forward with a spear (or other pointy limb) covered in flame, causing damage to the opponent and a potential burn. If the move would not be very effective, it deals an additional 20% damage to compensate, but won't cause a burn.

This third one is a status Fighting-type move called Move Restore with 5 PP and affects either its allies or itself. It restores a move (that is not a OHKO move, Sketch or Revival Blessing, or Move Restore itself) by half of its max PP (in the case of moves with odd numbered PP, less than half of max PP will be restored, i.e 2 out of 5). It would likely be a TM move only, due to the nature of this move.

The fourth one is a physical Flying-type move called Quick Swoop, with 70 base power, 15 PP, and 95 accuracy. The user quickly swoops down on a target, dealing damage and may cause the target to flinch.

The fifth one is a status Fairy-type move variation of Powder, called Pixie Dust, with 20 PP and 100 accuracy. It covers the target in dust that damages the Pokemon if they try to use a Dragon-type move.

The sixth one is a special Rock-type move called Stone Tail, with 120 base power, 5 PP, and 90 accuracy. The user swings its hard tail at the opponent, dealing massive damage and lowering Defense, but in return this move cannot be used twice in a row.

The seventh and final one is a special Water-type move variant of Dragon Tail called Wash Out, with 60 base power, 10 PP, and 90 accuracy. The user releases a wave of water powerful enough to switch out the target.

I was supposed to post this yesterday but it came out a bit late, so enjoy this.

This time I have a Legendary Fakemon (and the Paradox forms) that I made yesterday (this time the only inspiration was this song here.)

Entry 1: Its body releases a sweet scent that allows it to control the 'desires' of others. Sometimes it causes the affected being to act upon its thoughts.
Entry 2: Its hair is very long, but parts of it are translucent and glow dimly, giving the appearance of a veil. This veil is thought to be used as a disguise, allowing it to move without the suspicion of humans.
Entry 3: Its body is actually intangible for the most part; only its head and limbs are semitangible, while the rest of its body passes through most surfaces with ease.
Entry 4: If disturbed while sleeping, it smears a highly unpleasant smell on the offender, in the hopes that it will leave. But if it doesn't, it will suppress their desire to do anything until it wakes up.
Hidden Entry: No one knows what dimension it came from. Some scientists debate on whether or not it is a Pokémon.

Entry 1: It is said to be a future relative of a certain Legendary. Its entire body is too heavy for it to float in the air, so it relies on the rocket blasters its developers built.
Entry 2: Because of its faulty design, it attacks others, and uses their bodies to live life through them.
Entry 3: It appears to vaguely resemble a futuristic form of a certain Legendary found in another dimension. Most of the information surrounding it seems to come from either an old book or a dubious magazine.
Entry 4: No one knows how it appeared in our current time, although many claim the presence of an odd energy may have resulted in a dimensional warp.
Hidden Entry: The smell it emits is said to smell so badly it has a very hard time affecting the desires of others in any significant way.

Entry 1: It is said to be a ancient relative of a certain Legendary. Its veil-like hair is used to trick other Pokemon.
Entry 2: Oddly enough, the scent it emits is much closer to a citrus odor more than its contemporary counterpart, which smells like sandalwood.
Entry 3: It appears to vaguely resemble a primordial form of a certain Legendary from another dimension, but most of the 'information' surrounding it seems to come from an old book or a dubious magazine.
Entry 4: It controls not only desire, but also instinct. It uses these powers to control others without their knowledge.
Hidden Entry: Its dress-like body resembles the clothing of a certain culture from a distant land, and it's said that it uses this appearance to control unsuspecting Pokemon.

In addition to these, here's a new non-Legendary I made up.

Entry 1: Since the apple it inhabits is now rotten, it has to eat other apples. If it winds up stuck with other Applin, they may become malnourished while Phantalma tries to sustain itself.
Entry 2: If you have it as a pet, be sure to have plenty of Berries or nutrient supplements on hand. A household with one of these Pokemon must be sure to lock their fridges and pantries.
Entry 3: Apparently the juice it produces is slightly salty, but is mostly disgusting in terms of taste.
Entry 4: It's seldom seen outside of its apple long-term, but when they are found, they're usually hidden from the view of potential predators.

Connected to?: Dawn Mountain, Plateau of Dusk (I'll talk about them in the next post)

What Pokemon do you think would be in an Australian region Pokedex?

my fakemon region - the xesse region

I shipped a rarepair and found this amazing fanfic