I'd say episode 45 or around there Leomon will croak. At this point he's like Kenny.

Ep 20: This one was pretty good actually. The fight choreography was neat with WereGarurumon missile surfing and stuff, and Angemon's reveal was neat. Overall pretty neat. One this that does confuse me though, is where the fuck was Angemon actually being kept? He was apparently able to just, burst through the ground right where he needed to be? Like, what is the spatial relevance of this? Also rather disappointed that Velgemon just seems to like... Exist, with no relation to any spirits or anything.

That episode preview though, uhh, "A never-before-seen miracle befalls MetalGreymon". I swear to god if this is fucking WarGreymon


Norowara said:
How long is this series going to be? Just asking because I'm interested in "betting here".
Click to expand...

Hmm you know I'm not actually sure if we have a total episode count, I'll look that up

YOU HAVE SIXTY SIX FUCKING EPISODES TO WORK WITH AND YOU CRAMMED ALL THE SUPER EVOLUTIONS IN BEFORE THE END OF EPISODE 15!? W-why? What is gained by front loading the first quarter with a bunch of shitty, rushed evolutions if you have a whole 66 episodes to spread things across? Hell that's 12 episodes more than the original series got! You could've made a great slow-burn story and instead you produced this!?

Ep 21: Yet again, I liked it. Good implementation of Takeru, the Physical World side is bringing things from the previously weird and out of place first 3 episodes back into relevance, and MetalGreymon getting a modification rather than an evolution is a cool, interesting new thing that's never really come up in a mainline series outside of DigiXros which offers some logistical issues that this sidesteps nicely. And the moment that triggered it was pretty fucking cool as well. Like, if that had actually been WarGreymon like I thought it'd be, I'd be annoyed by the horrific pacing, of course, but I also wouldn't have been upset that this was the way it happened. Also interested to see if that railgun is just a thing that MetalGreymon has now, or if it's some kind of "big moments only" thing that has to be triggered.
One thing I am slightly concerned about though is the preview giving the impression that WereGarurumon's gonna get his in the very next episode, implying that same annoying "One-Per-Episode Powerup Speedrun" tactic they used for the Super Evolutions. I hope I'm wrong, naturally, but I wouldn't be surprised if they did.
Last edited: Nov 2, 2020

Ep 22: I love Sagittarius Mode. There, I said it. It's hard to say much about an episode as generally competent as this one. The moments of Sagittarius Mode was good, and the character work was pretty neat.

Ep 23: I'll be honest, it's been a week, and I can barely remember any specifics about happened in this episode. It's just an episode playing itself up as a climax that immediately gets supplanted by the very next episode being the actual climax and is just extremely forgettable because of it. One thing that does annoy me though is that the efforts of the Tokyo Team are made completely pointless and immediately invalidated. They played a big part in beating NeoDevimon, but DarkKnightmon instantly upping the ante to DoneDevimon means that they didn't actually solve anything, making them feel entirely pointless in the grand scheme.

Ep 24: The choice of timing for this episode is just baffling. This is a 66 episode series, and yet Agumon just hit is final solo form (barring some truly unexpected surprises) right at the end of episode 24. Barely a third of the way through the series. Moreover MetalGreymon only just got Alterous Mode literally three episodes ago. Are we just supposed to stop caring about that now? What they're going to do for the rest of it is entirely beyond me.
All that said... I can't actually be that mad at a moment as fucking sick as that one was. It was fucking incredible in a bunch of ways, it just feels like the kind of climax that should've capped off a full arc, rather than just coming 6 episodes after the last one finished.
The choice of timing for evolution into Patamon was... Certainly a choice. Kinda killed the entire mood of the scene, really.

As a whole, I'm kinda disappointed Devimon went down like such a chump even after evolving twice. He never actually got to do anything, and we never really learned what he actually wanted out of anything. Just feels like a waste of a character.

Ep 24: The choice of timing for this episode is just baffling. This is a 66 episode series
Click to expand...

Wait, where'd you hear that this was going to be 66 episodes? Is there a source confirming this? I never heard anything about Toei mentioning how many episodes it was going to have.

Juliko said:
Wait, where'd you hear that this was going to be 66 episodes? Is there a source confirming this? I never heard anything about Toei mentioning how many episodes it was going to have.
Click to expand...

The official Toei website has it listed as a 66 eps x 23 min series, so I can only assume that's the correct episode count.
DIGIMON ADVENTURE (2020) - Toei Animation

Ooooh, I didn't notice. Thanks for the info.

I have mixed feelings on the Devimon arc. In one hand all episodes follow the "Let's beat up the voiceless and personality-less villain of the week" formula, making it extremely tiring to see and at times predictable. But in the other hand it actually brought back some of the "strong sentimentalism" that has been missing, as we saw anger, tragedy, hope and braveness situations and TK and Tai really received some development. The subplot in the real world was great, I liked seeing Izzy in a leader role.

For the first time in the franchise I'm glad that Tai and Matt are the only ones with access to a special form, as I prefer that to sitting through another 6 weeks of redundancy.

Ep 25: So uhh, are we gonna talk about the fact that our heroes just slaughtered a swarm of Mamemon implied to be doing nothing except following their base instincts? Like, those suckers popped. They're dead. And they're implied to have no higher intelligence and are just reflexively attacking objects that stray too close to their storm. I know wild, animalistic Digimon being fought off and maybe even killed in extreme cases simply as part of survival isn't exactly new for the franchise, hell they kill a pair of wild Seadramon to avoid getting eaten in the very next episode, but seeing a swarm of non-malicious living creatures used as nothing more than tools to slow Eldoradimon's descent strikes me with a very odd energy that I don't quite think we were supposed to think about, and that I'm not sure was even considered as an angle when writing the episode. Be The Winners coming back after a decent absence was very welcome though, since it is the better evolution theme.

Ep 26: Ok, so I was inexplicably incredibly amused by Hikari just standing there all horror movie creepy child as the Tokyo Team worked on the situation. I am so incredibly angry about how they went back to the Digital World though. "But how do we even get back to the Digital World?" "My plot relevance is tingling." *Inexplicable ass-pull teleportation* It's just lazy fuckin' writing, man.

Ep 27: Hmmmmm... It definitely feels like they want us to think Leomon's dead, but I figure that without seeing it it didn't happen. The framing around it is all wrong. Pretty bangin' soundtrack when the Tortomon attack though. I adore Greymon and Garurumon's interaction when facing down Groundramon, and the strategy for beating Groundramon was fun (if a tad grotesque). Honestly, overall, a much better episode than I expected given the last two, with some truly stellar art in places. 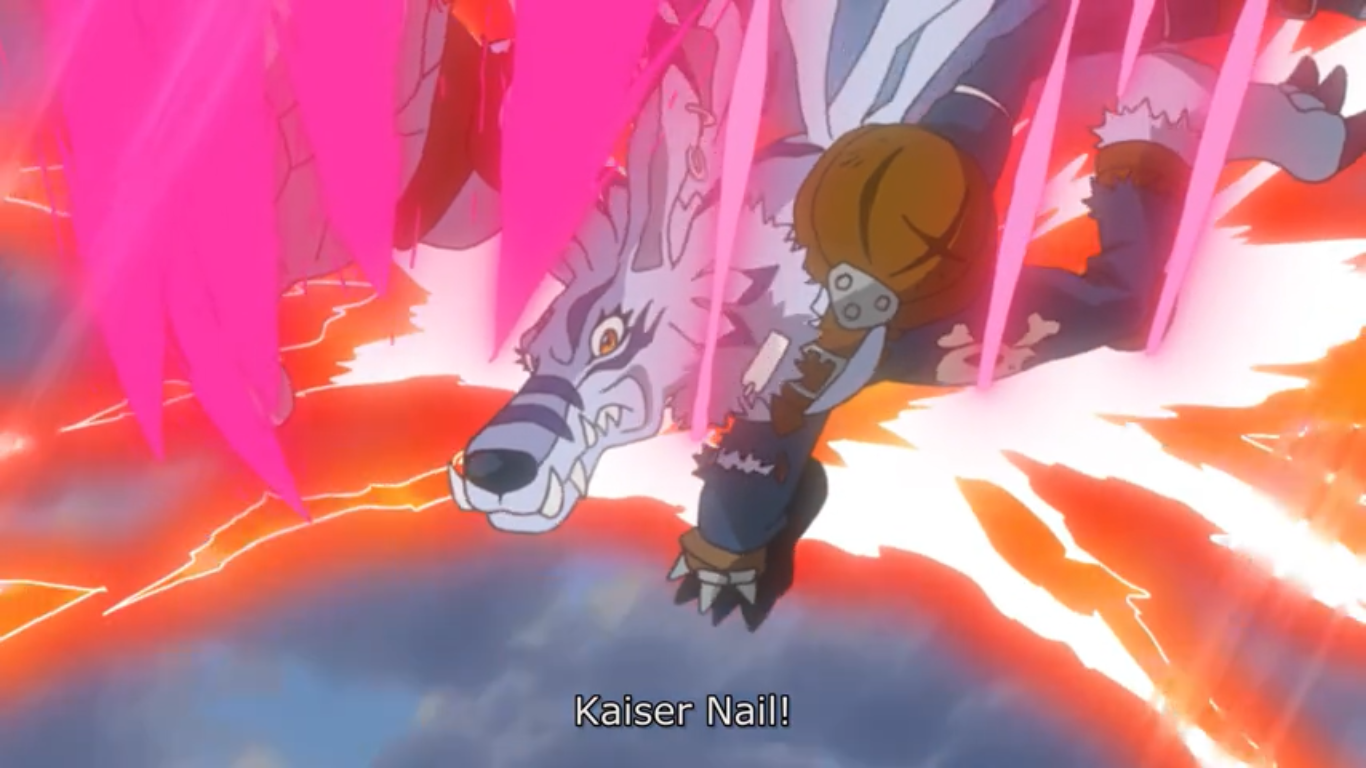 One thing I do want to mention that I've previously complained about, but think has come into a different focus in the past two episodes, along with the title of the next one (The Children's Fight For Survival), is the whole "Silent antagonist" thing. The new emphasis on "It's a Digimon-Eat-Digimon World out there" makes me feel like the actual intent with the random wild Digimon showing up, silently attacking, and being wiped out, is an emphasis on survival in a savage world, and every now and then a plot will wander in with an actual character or two to carry it. Rather than a place filled with funny lookin' people, this Digital World is a place filled with savage animals who want to eat you for sustenance. It's still an approach I'm personally not a fan of, but I'm now willing to cut the structure a bit of slack since it now feels more like an artistic direction for the series, and if approached properly can still carry a perfectly good character-focused story on the kids (which has been fairly unremarkable so far and I'm hoping it picks up). It's also something to set it apart from the original Adventure, which is nice.
Last edited: Dec 13, 2020

Ep 28: The Voldramon fight was... A mixed bag. The fight itself sucked ass, the animation was incredibly limited and the fight literally just boiled down to "shoot gradually stronger balls/beams of energy until it's over" on both sides. On the other hand, I am adoring all of this build up to WarGreymon. We haven't actually gotten WarGreymon yet. We've gotten silhouettes, flashes of its power without ever actually properly producing the form. They're treating this as a big, dramatic thing, which, by all rights, it should be, and they're not just doing it like so many other forms in this series have been. I'm really excited to see the moment this triggers for real.
Also, I'm honestly just really glad Angemon isn't just vanishing for literally 20 episodes since his last appearance. Maybe he'll even evolve in something resembling a timely manner.
One more really cool thing I noticed: Those jaws that clamp shut during the MetalGreymon evolution sequence? That's Machinedramon, and I went back to check, they've always been Machinedramon. That evolution fuck up was dangled in front of our faces right from the start for anyone with a good enough eye to catch. 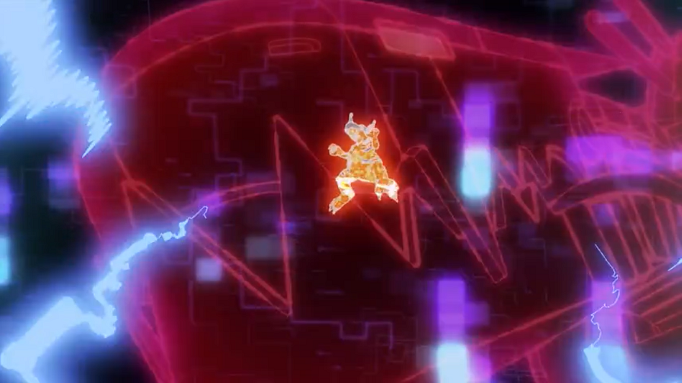 Ep 30: Ohhhhh yeah. THIS IS THAT GOOD SHIT! The build-up, the animation on the sequence, the theme! All of WarGreymon was just great. Though, personally I would've chosen the climax of last episode for the timing, since the emotions were running so high with the Woodmon and Budmon throwing their cherry taps out onto Tankdramon, but overall still Very Good Shit.

The post-Devimon episodes were very meh. All of them were Greymon beating the Digimon of the Week over and over again. And I would have preferred WarGreymon to debut against Devimon than against one of these, I get the reference but it feels very anticlimatic. Also, I'm starting to dislike the "Real world is in trouble!" subplots, they were interesting at first but now the satellite thing feels like a rehash of the ship thing, and they will like excuses to give Izzy something to do since Tai is the only one who matters.

Things got somewhat better in these Early 2021 episodes, thanks to some focus on TK (WTF Pegasusmon appeared! I'm clueless as to why.)and Kari, but it still feels like Tai always has to be there in order to show his digievolution sequences over and over. So I'm not sure if I should feel optimistic or pessimistic, specially when the villain is extremely passive to the point you could say it still doesn't exist.
Threadmarks
You must log in or register to reply here.
Share:
Facebook Twitter Reddit Pinterest Tumblr WhatsApp Email Link
Top