Your work is brilliant! May is looking really beautiful. And Robin is also nice. I liked both the drawings.
Charcoal pencil studies: Now showcasing: Kumatora (MOTHER 3) - Next: Ayumi Tachibana (Famicon Detective Club)

@Cutiefly: Thank you! Good to see you again in here!

Gallery: 31 May 2017
So because I wasn't able to make as much progress as I had hoped, I am just going to do a small update now. This time, we are meeting a more obscure heroine from a decade ago, much beloved by the western community along with a Nintendo franchise from Shigesato Itoi that has never seen the light of day outside Japan.

Ladies and gentlemen, here is Kumatora from MOTHER 3! 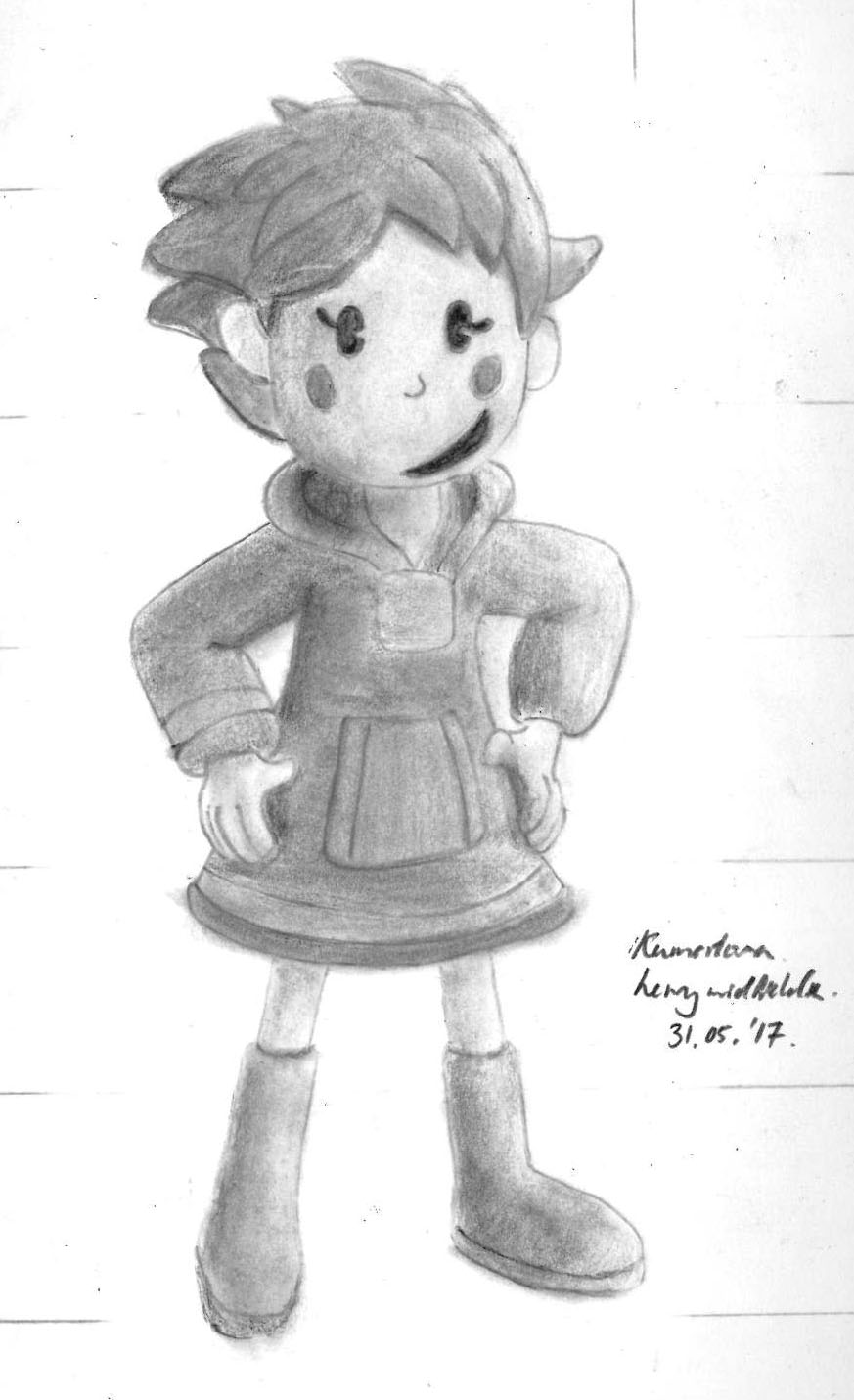 Somewhat ironically, I wasn't as enthusiastic about Mother 3 as I was with Mother 1+2 when I first played the game years ago. My reasoning is mainly due to how much of a departure 3 was compared to 1+2 - which is actually the same reason for the lack of enthusiasm from fellow Japanese gamers. I guess I prefer an adventure that takes me to different places across the nation (1) or even the globe (2). I wouldn't mind giving 3 a second try, though, and give a bit more consideration and understanding to see why it is very popular with non-Japanese gamers. Perhaps, this has also somewhat tainted my view of Kumatora as well, considering that I have better enjoyment with Sully, another tomboy from FE Awakening. (Though I'll still put her a fair amount above Nintendo's resident damsel scrappy.)

As for the artwork, I was expecting a difficult time similar with Paula (MOTHER 2), shown earlier in this thread. Surprisingly, my new smudging tool proved to be better in creating a more nuanced differences in shading.
Next up is a heroine from a similarly obscure entry - Ayumi Tachibana from Famicom Detective Club, an early Japan-only franchise from the original NES. (Some of you may have seen her as a trophy from Super Smash Bros Melee.

PS!: I now have an updated poll (courtesy of @Soki) to ask you of your coming preferences, so voting from your end would be much appreciated.

Sorry it took so long. Firstly there was a mandatory break that was mandated on me, then some huge workload at my office, and then music rehearsals for the State Competition that my concert band is in. Anyway, today, I not only have Ayumi Tachibana from Famicon Detective Club, but I also have Dawn from the Pokémon Anime. 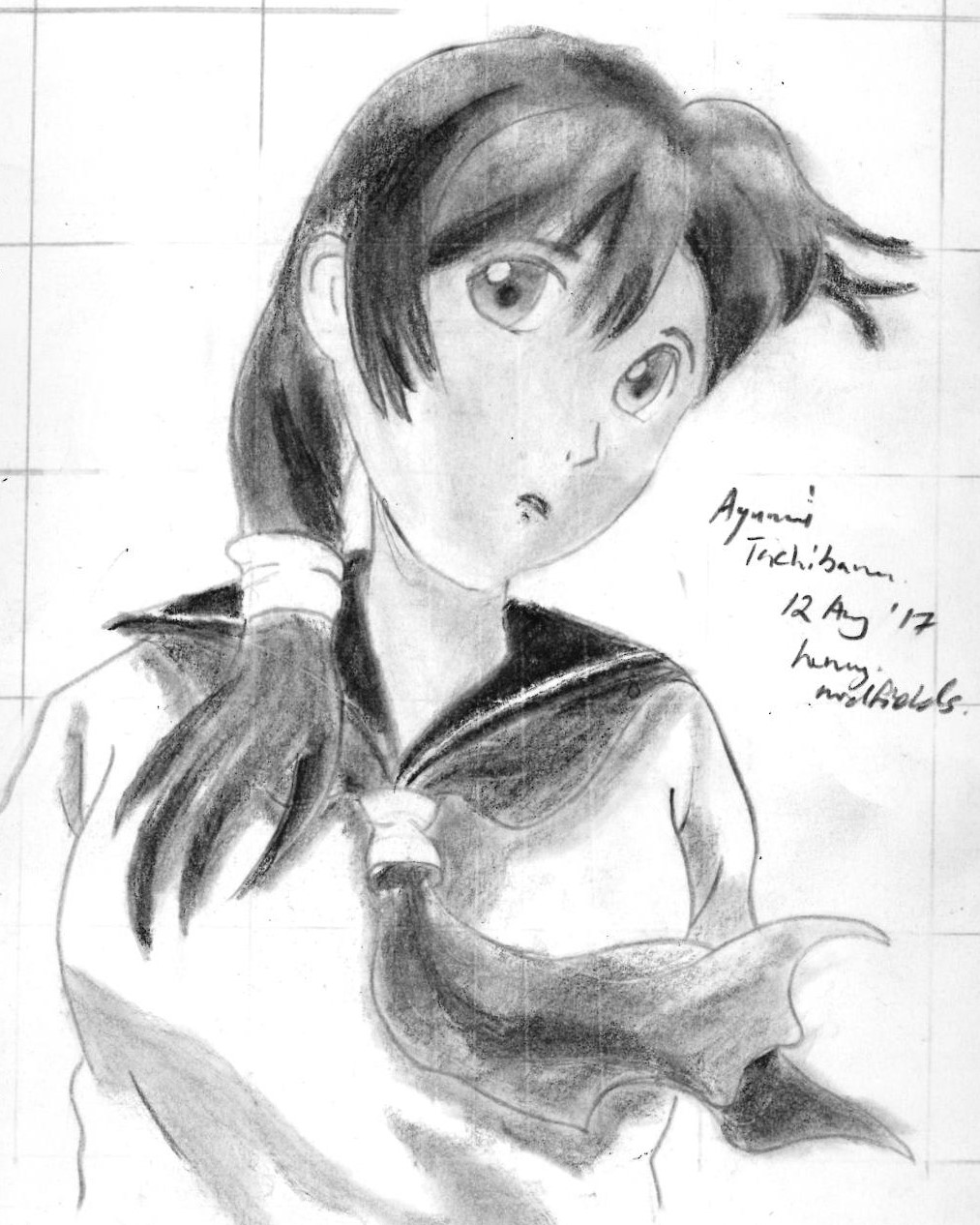 I personally don't know much of the character; in fact the first time I've heard of the Famicom Detective Club series was from Smash Brothers Melee. An ordinary high school student in a typical Japanese city, she would help solve a crime involving both the murder of her classmate and another girl from 15 years before the game. 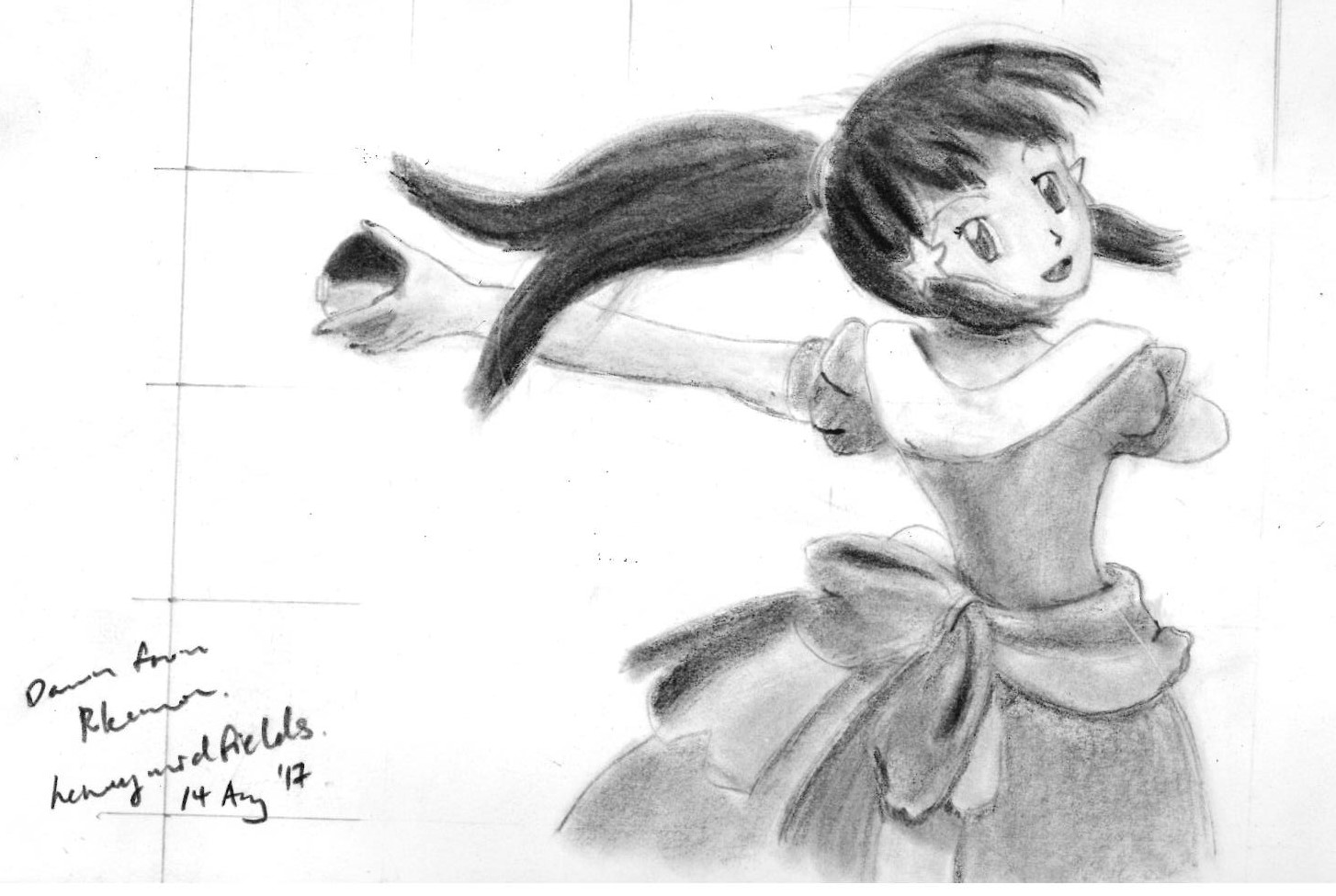 A scene which featured Dawn in a Pokémon Contest show. The original scene is from the very first image of this Google search. (For some reason, the Photobucket-reliant image hates my PC and won't show the image) I've improvised the anime scene more to add more shadow, light and texture to Dawn's hair and ribbon, and to slightly alter of the hairstyles to emphasise the flowing nature of Dawn's hairstyle. Also, unlike what I've done with May previously, I've decided to show the form predominantly through light, shadowing and surface texture shades. I will be doing this a lot more for the Pokémon Anime characters
Also, the votes on the top polls are still on. For the two who previously voted Dawn, can you please recast your votes onto other characters?

I've got one person from Serenes Forest wanting to see Eirika from FE: Sacred Stones next, while one of my best friends from the real world wants to see Adelaine from Kirby 64, so these two are what I will work on next. Others on the list as of this moment are:
Finally, feel free to use the images for your avatars, if you have a favourite. If anything, it would be good publicity for my campaign to take over Hoshido, no, the art section...
Last edited: Oct 16, 2017
Charcoal pencil studies: Now showcasing: Eirika of Renais (Fire Emblem Sacred Stones) - Next: Adelaine from Kirby!

@NMLewis and @Soki , thank you for viewing as always. @noworry , may I extend my belated welcome, and I hope you enjoy my humble gallery!

Okay, this time would be another Pokémon-less update. In response to a voter at Serenes Forest who wanted to see my imitation of Eirika from Fire Emblem: Sacred Stones, I spent a month on and off drawings Eirika. There was a lot of detail to go through with what turned out to be not quite enough paper space. It was quite a challenge in the jump in the level of detail. Anyway, here it is. 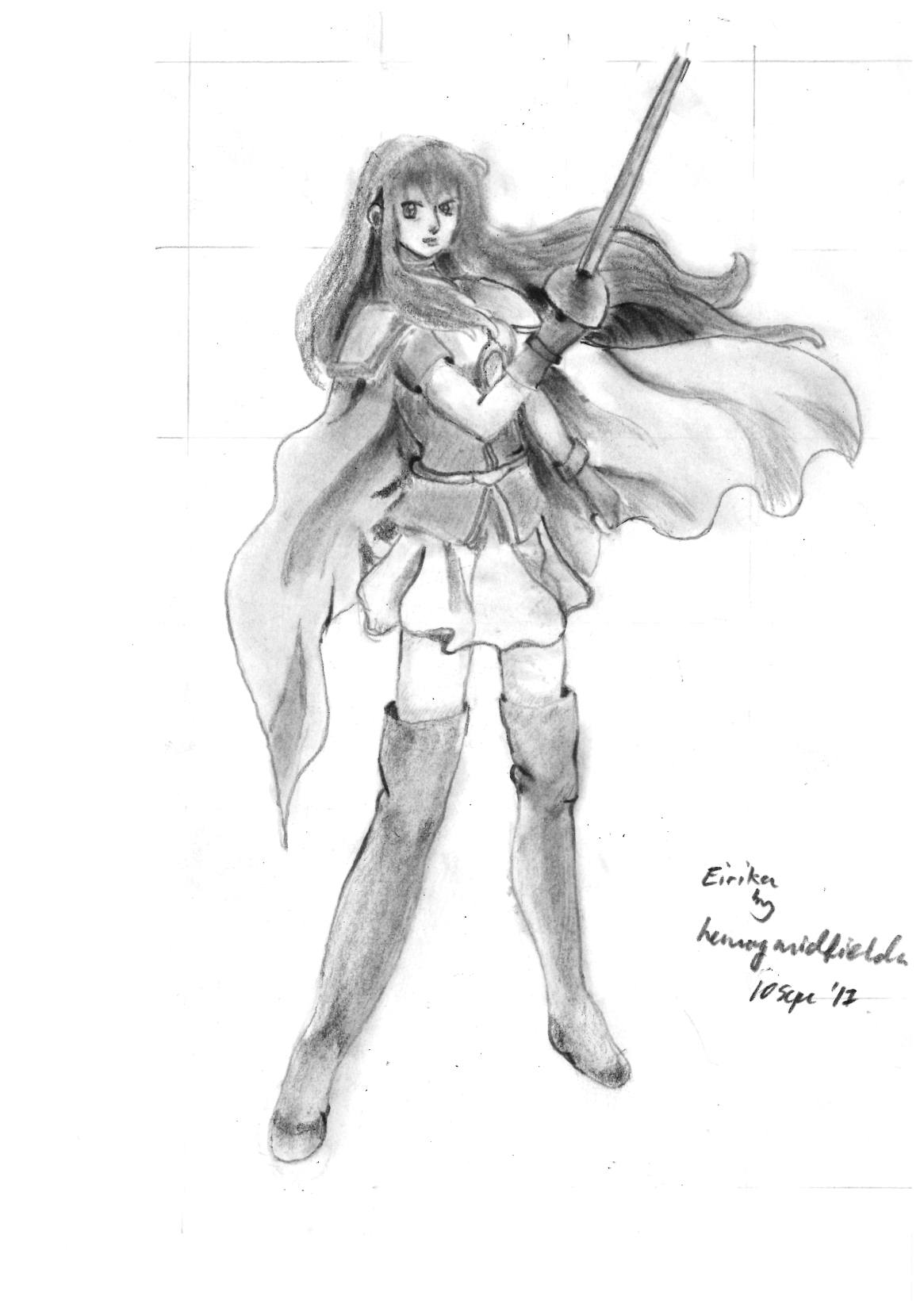 So I decided to do a full figure sketch for Eirika, but it looks like A5 size was too small for such detailed drawing. Firstly, I lost track of some of the proportions of the body, which led to Eirika's right leg being shorter than the official artwork. The change in Eirika's cape and hair was intentional; I never understood why her cape looked jagged in the official artwork - I don't remember Lilina or Roy's capes being that jagged in their official artwork.
My attempt in replicating Eirika's eyes and mouth was not quite successful either. Perhaps the resulting small drawings space made things harder. I might have to practice full figures in A4... Lesson learned I guess.

For reference, here's the official artwork.
My next attempts would be Lyra from Pokémon, and, in honour to a real-life friend, Adelaine from Kirby!

PS Also, whoever voted Dawn previously, can you change your votes to who you want to see next? (She's already uploaded in the immediately previous post.)

Aw, thank you for the welcome. Charcoal is (as far as my experience goes) very difficult do draw with, especially when it comes to details. I'm very impressed!

I voted for Celica in your poll, because I love her design, but I'm looking forward to seeing Lyra!

@noworry Thank you. I hope this would be one more opportunity for you to wind down. I've seen you blog entries, and I can say, I too had experiences of loneliness and homesick when I moved to Australia for Year 11-12. The worst thing is that it comes back for the first few days in returning to Australia after visiting my family in Japan.

I've also got an WWII-themed LP of FE Fates Conquest (see my signature) which is just about to wrap up. Which reminds me, once I finish, I will have to do a sketch of Beruka (who is my wife, and the future chief of CIA) and Sakura (who became a defector to my side) as my celebration for VJVH-Day.

Hi, a bit of an intermission...

So my first drawing of Adelaine is well underway: 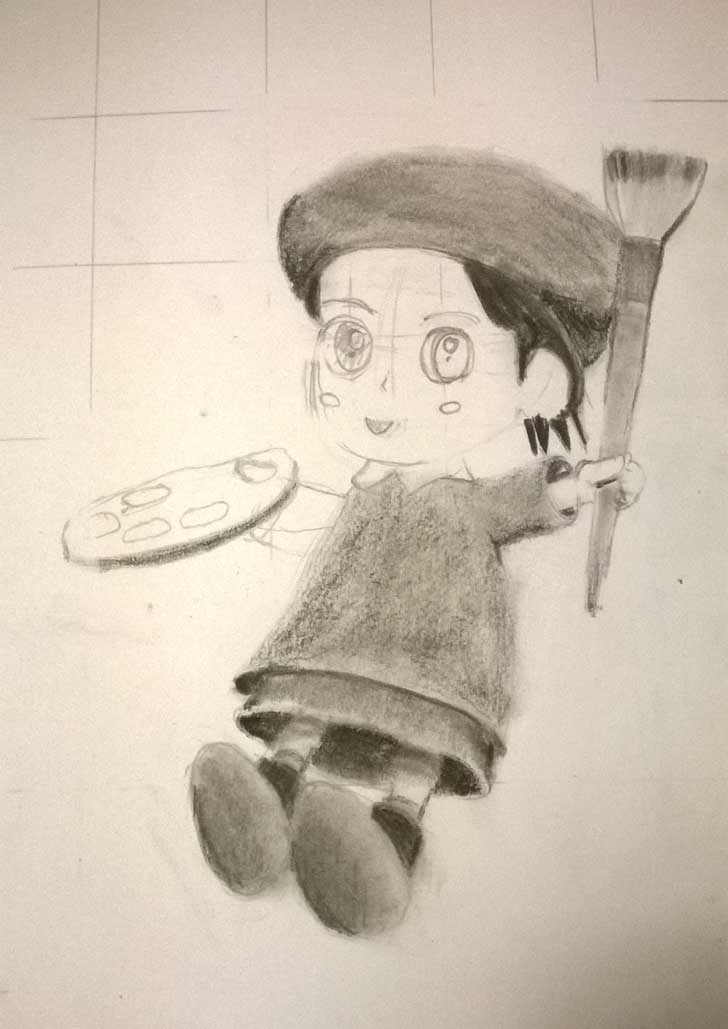 I also started doing some practice on other things as well. I took a couple of candid portraits on the train, and a couple of random stuff... 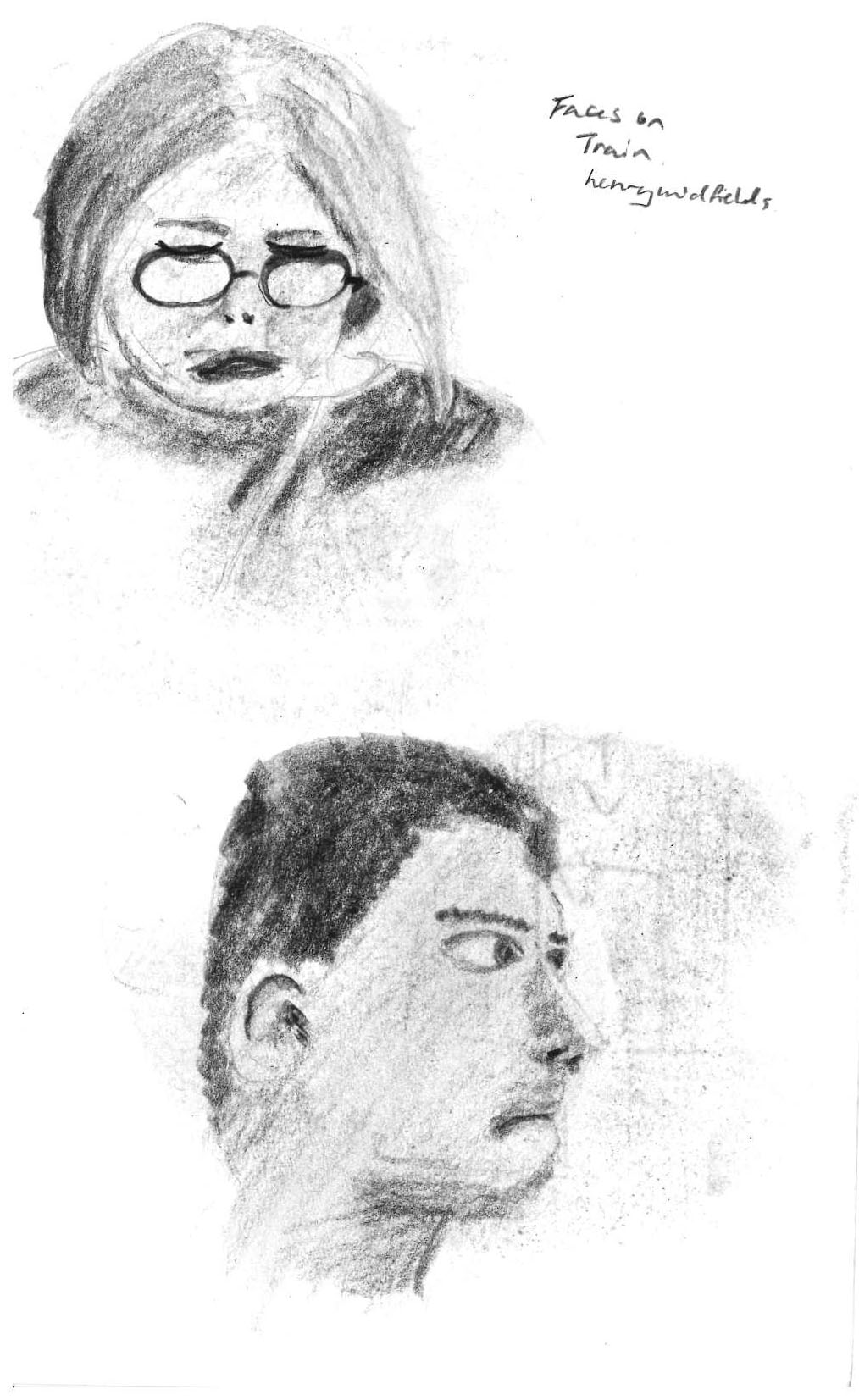 Faces on the trains 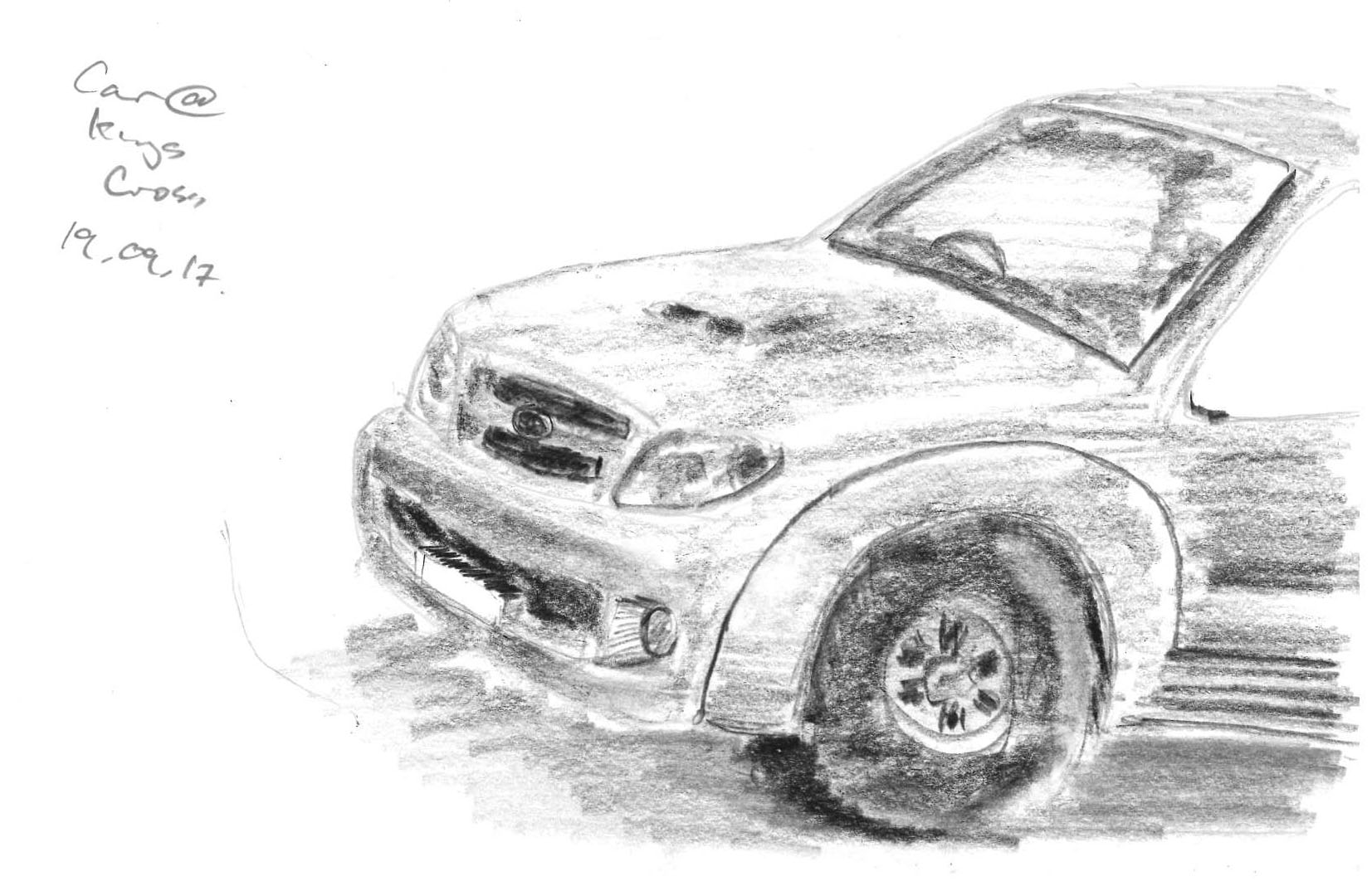 A car in King's Cross 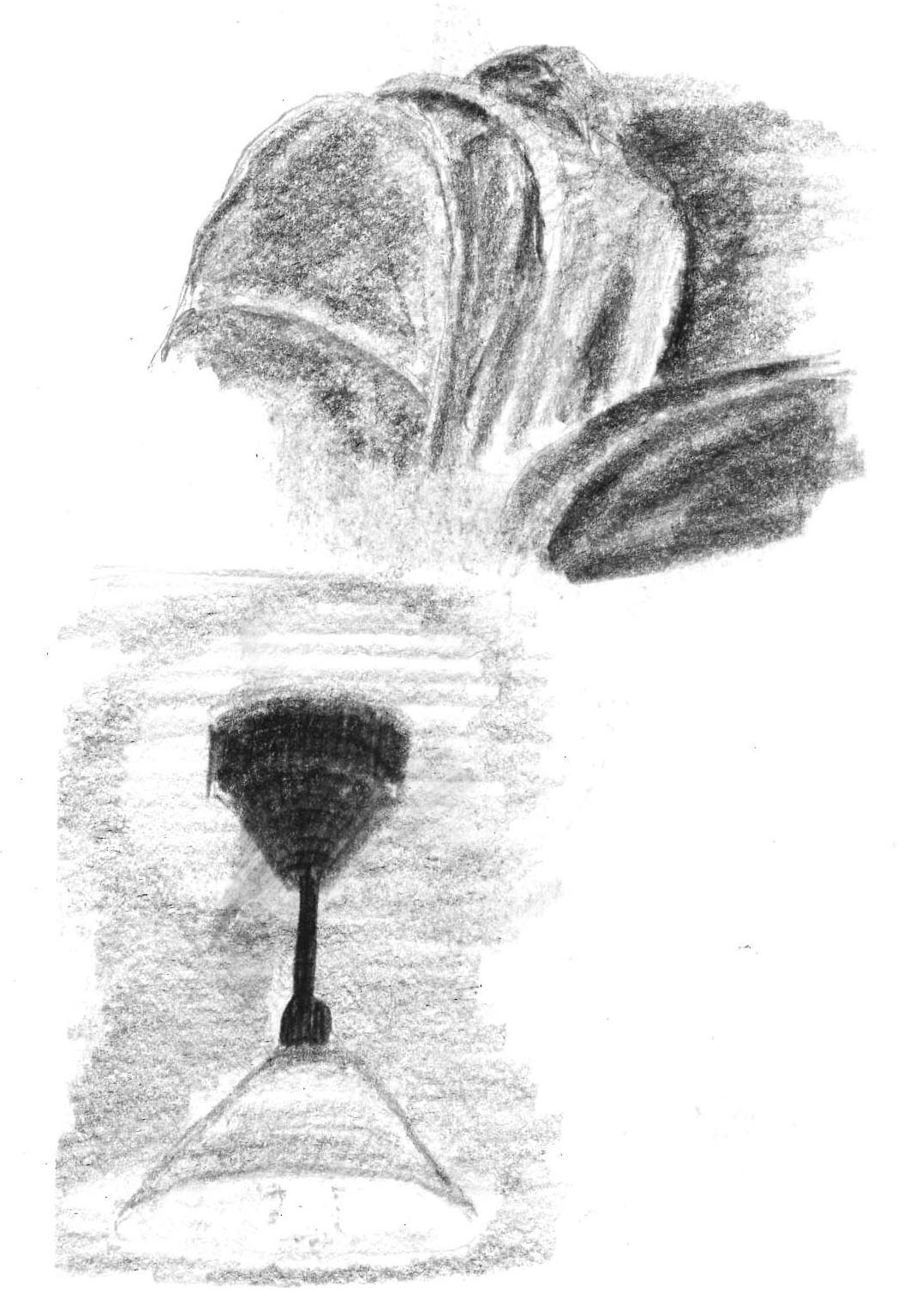 Gallery: 16 October 2017 - Adeleine Special Edition!
Hello again! I've now finished all three portraits of Adeleine for my real-life friend who sent in the special request. For now, here are the three portraits of the illustrious painter from Kirby 64! 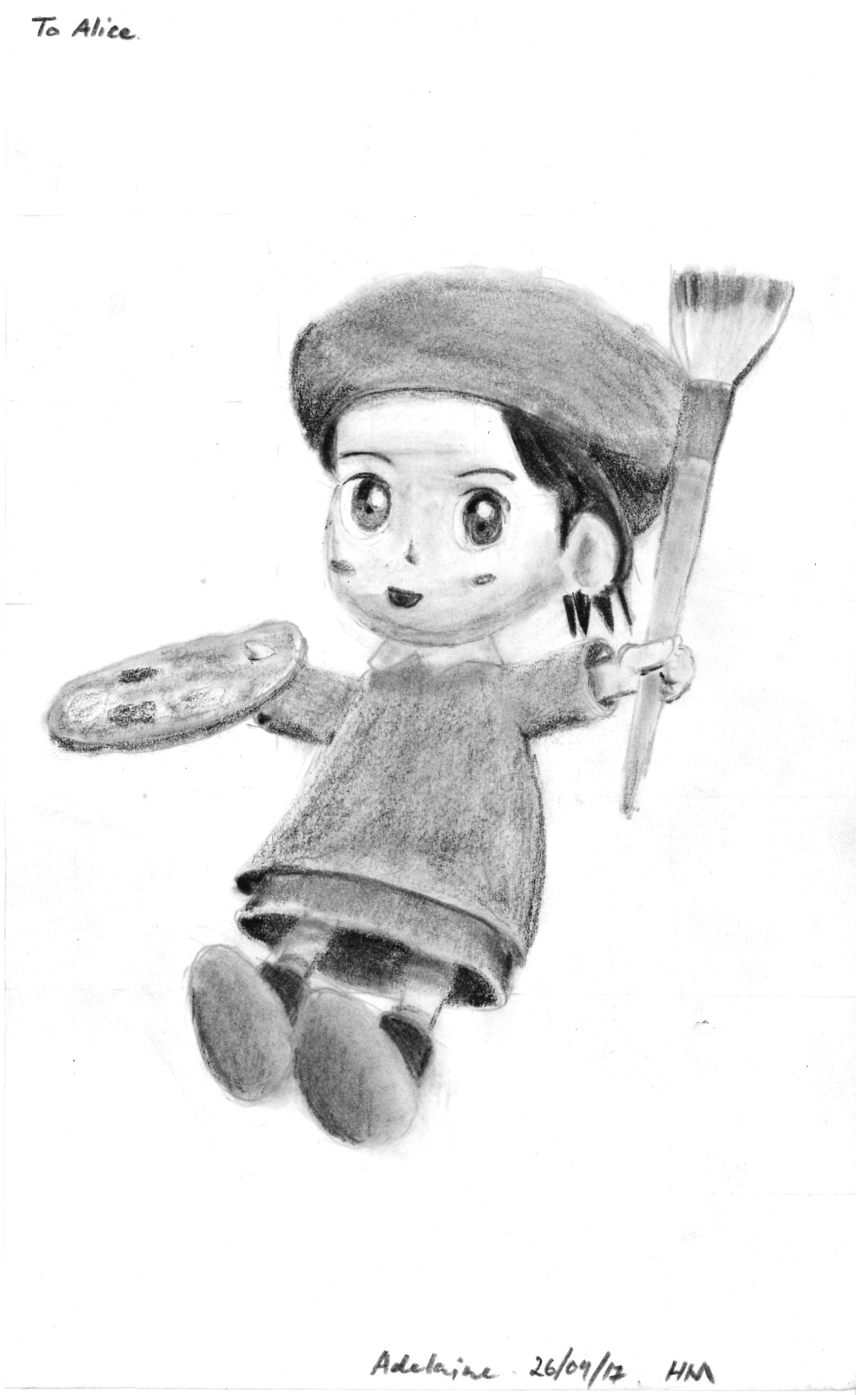 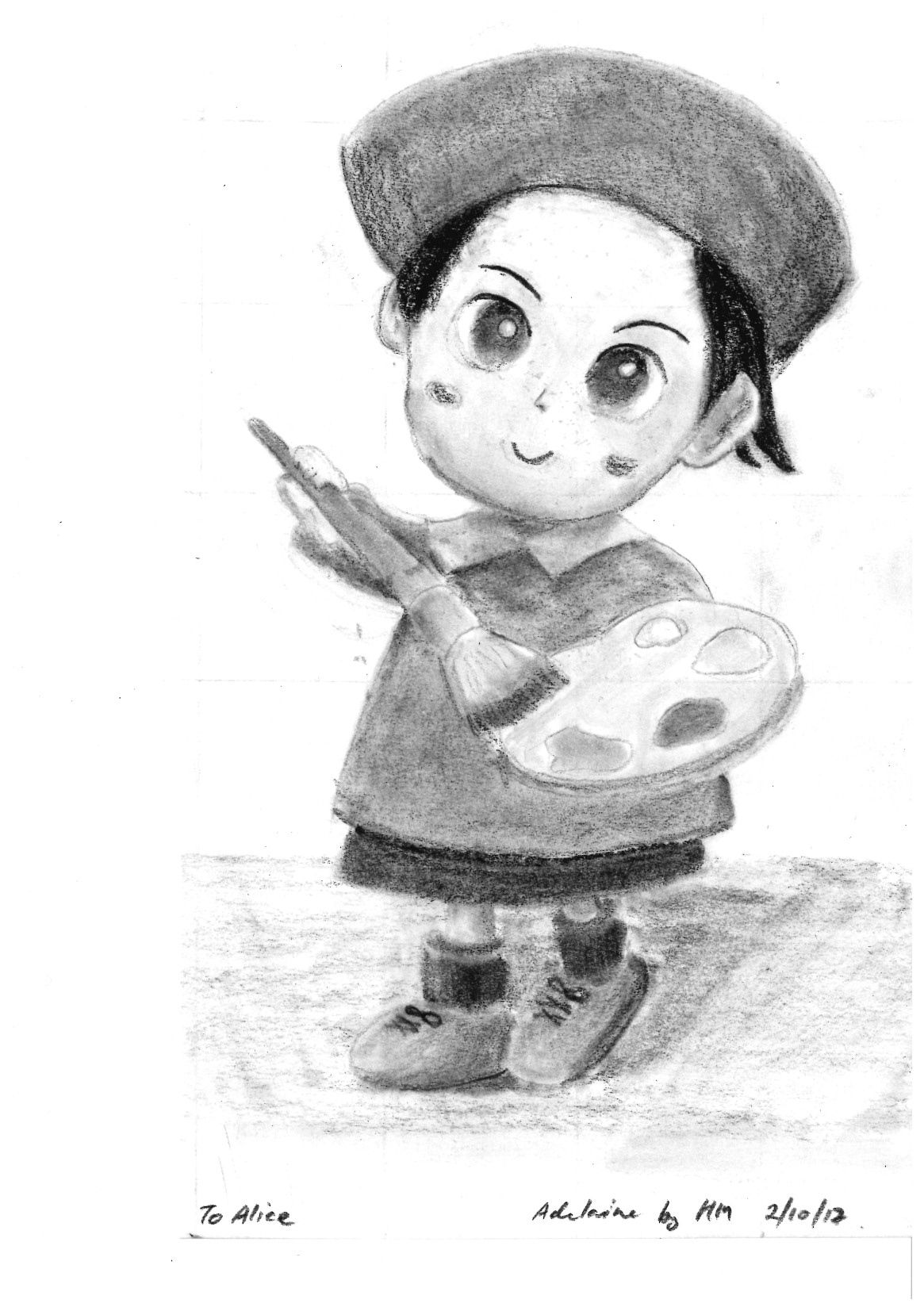 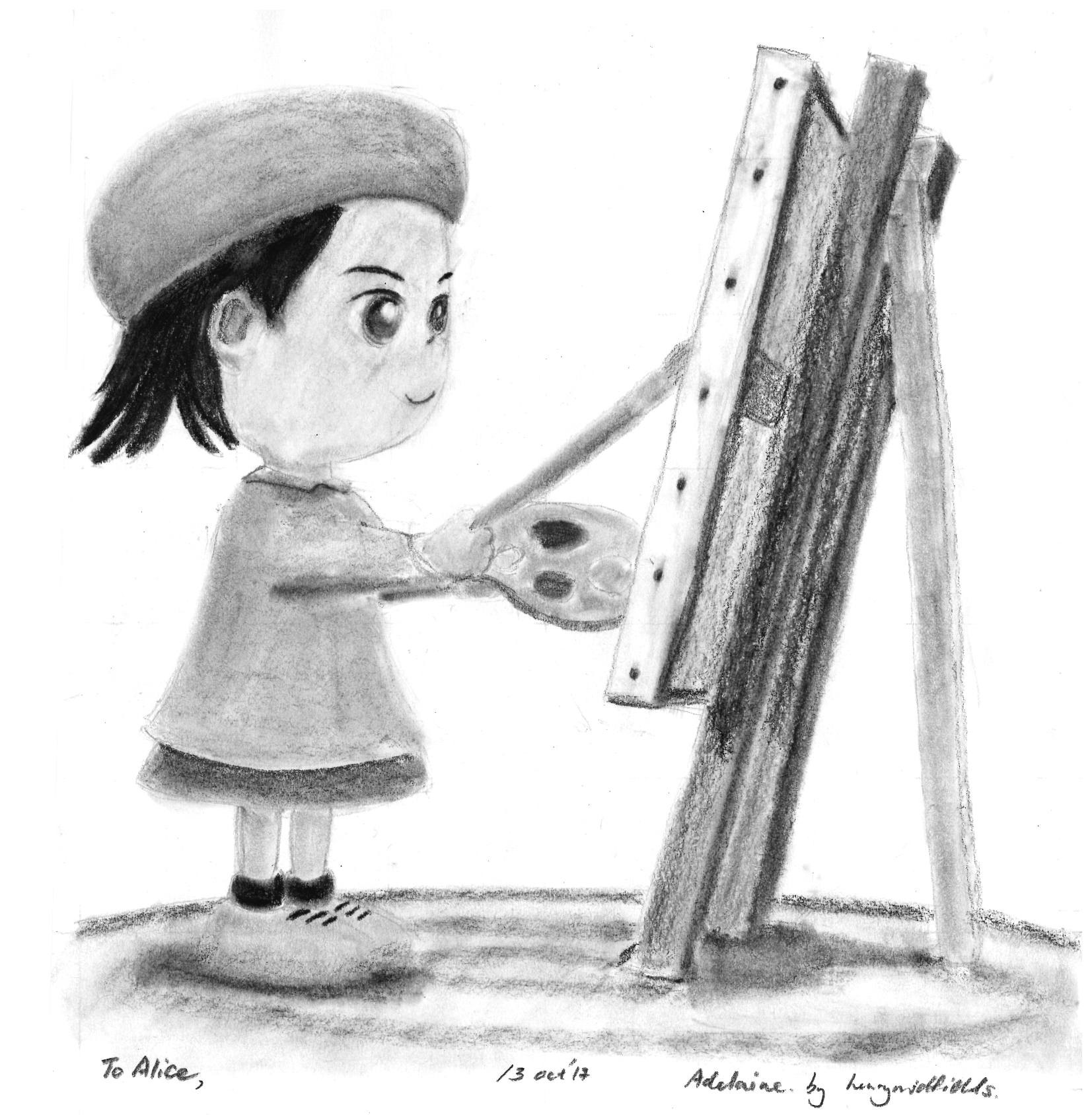 All of the artworks are based on official ones, and the third one in particular is based on in-game footage, and also in a bigger size format than previously. (All the previous prints of official artworks were in A5 size, but this one was printed in A4.) Again, I've re-interpreted and embellished the rather simplistic originals, to add depth through extra shadowing. To my joy, my friend in Tokyo found the pictures really cute, so I am glad that I was able to fulfill her request.

I also drawn up Lyra from Pokemon, in the anime version. It was much easier to draw her after doing Misty, May, and Dawn; the thing only took me a full day to fully draw her. 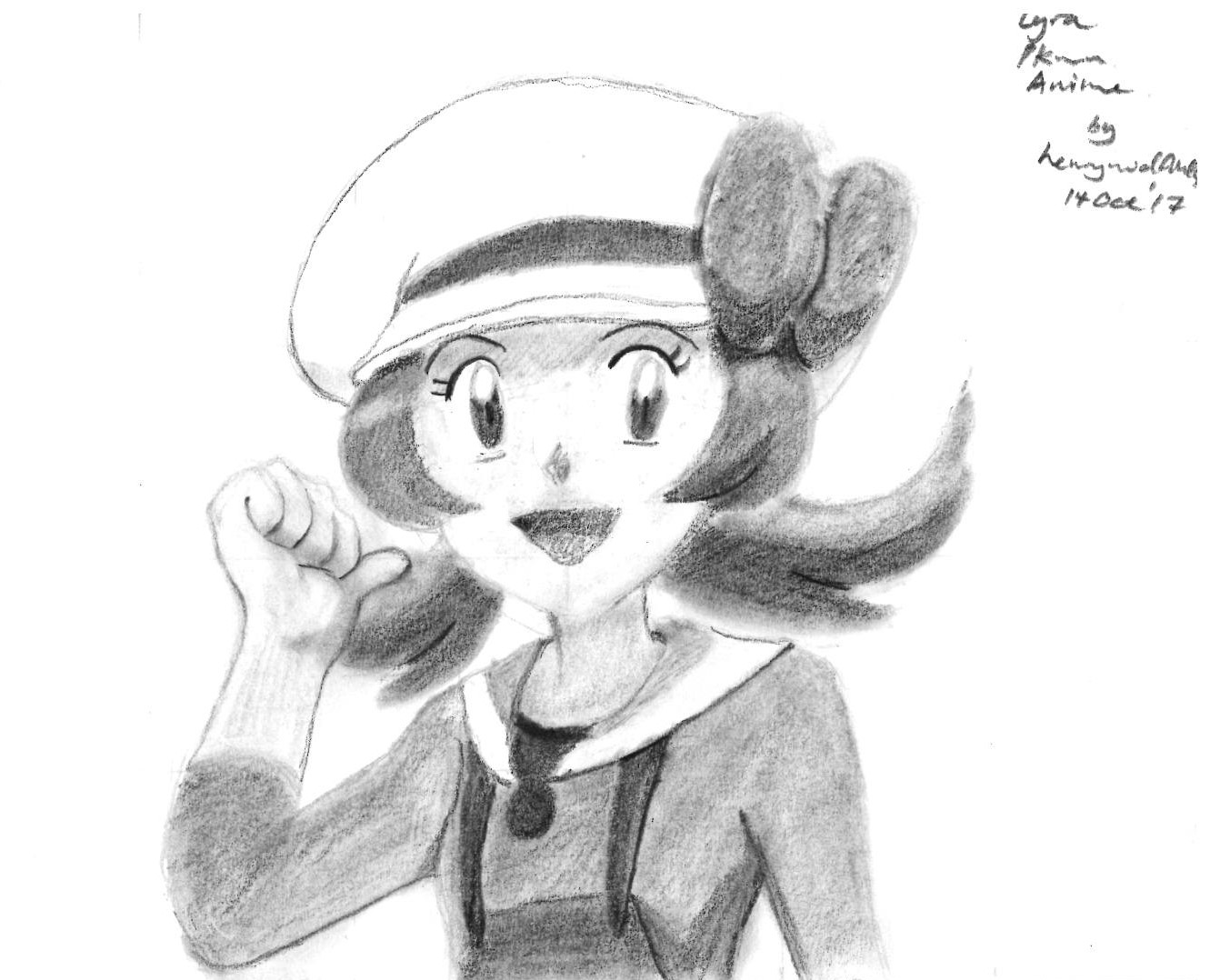 My plan onwards: From this forum, I have a few votes for Iris (from the Pokemon BW Anime) and Hilda (from the Pokemon BW game), while two people also voted for Celica from the FE Shadows of Valentia, and I myself want to showcase Nanna from Thracia 776. A viewer from my same artwork thread in Serenes Forest asked for Sheba to be drawn up, which I will do in the next available opportunity.

Finally, calling everyone who previously wrote or liked in my thread:
@Cutiefly, @Soki, @Sailor Galaxia, @noworry, @Rainbow Cloud @The Mighty Shedinja, @Mawile Mischief, @Shadao,
Sorry to be annoying, but have any of you previously voted for Dawn in the top polls? As she was uploaded in the 15 Aug '17 update, could the applicable member please reallocate your votes? (This can give me the decision who to draw next.) The answers no longer available are the already completed Lyra, Dawn (Pokemon) and Eirika (FE Sacred Stones); other answers are still available.

Brilliant work! These are truly beautiful. I especially love Lyra's drawing. She is looking really cute.

And I agree with Cutiefly on loving Lyra, she's one of my favs and she looks great!

So, um... I've started drawing up Celica, but I'm having some trouble getting the proportions right. I might have to alternate between her, Iris and Sheba. At least, now, it would look less cramped drawing Celica in A4 instead of A5 like I did with Eirika. FE characters were certainly challenging when I first drew Caeda and Lilina and still remains challenging. Too much elaborate costuming...

On the other hand, drawing Pokémon human characters seems easier now, so I might do some extra challenges when it's Iris's/Hilda's/Rosa's turn - while I'll still use a 3cm x 3cm grid, I'll try and see if I can reconstruct their official artworks from building up stick figures instead of trying to directly trace from the original. Either that or do their artwork interpretations with a bigger grid (4-5cm grid), in A4.

Also, while at it, who is in favour of seeing more characters from the Zelda series? I've got a couple that I want to start with: 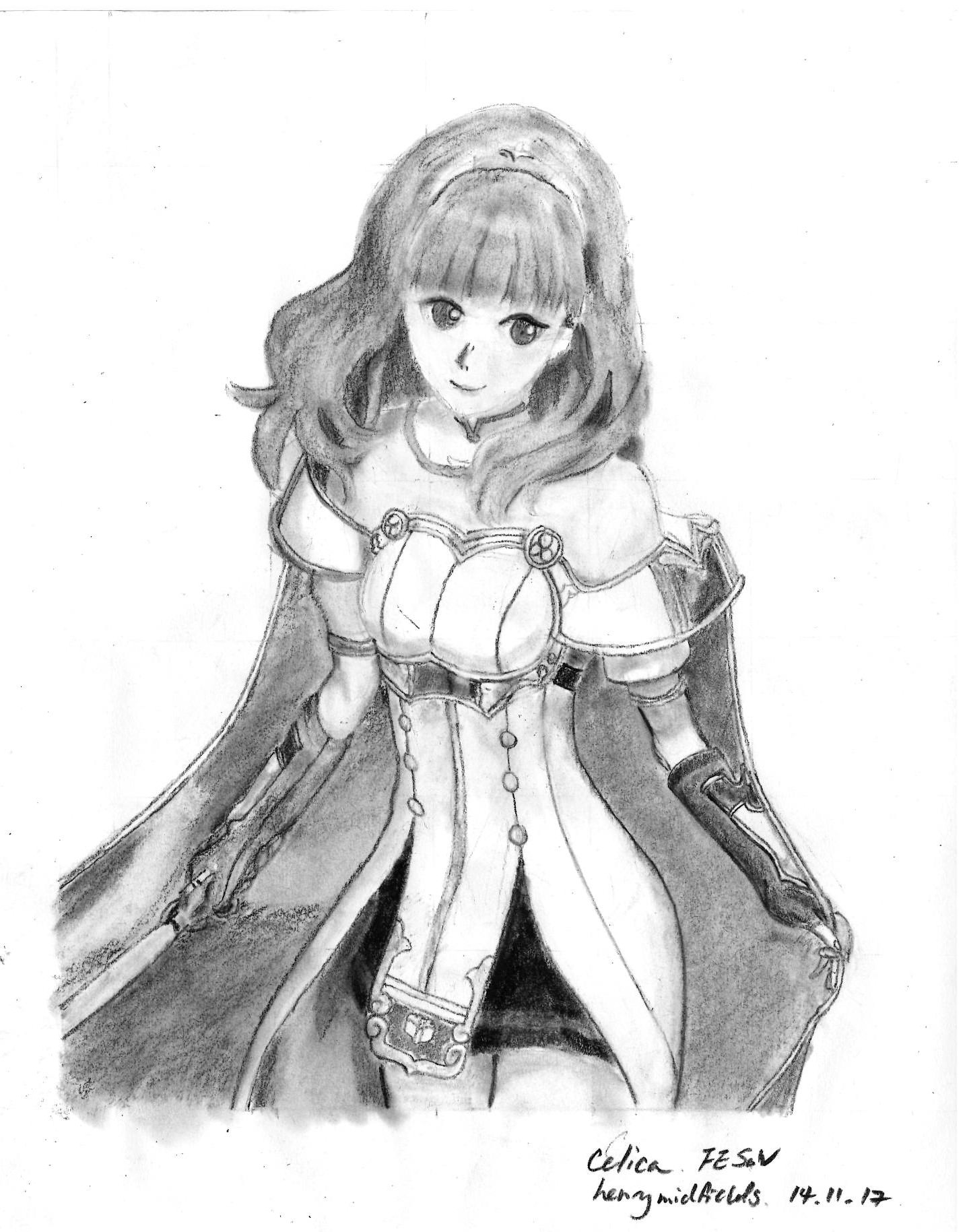 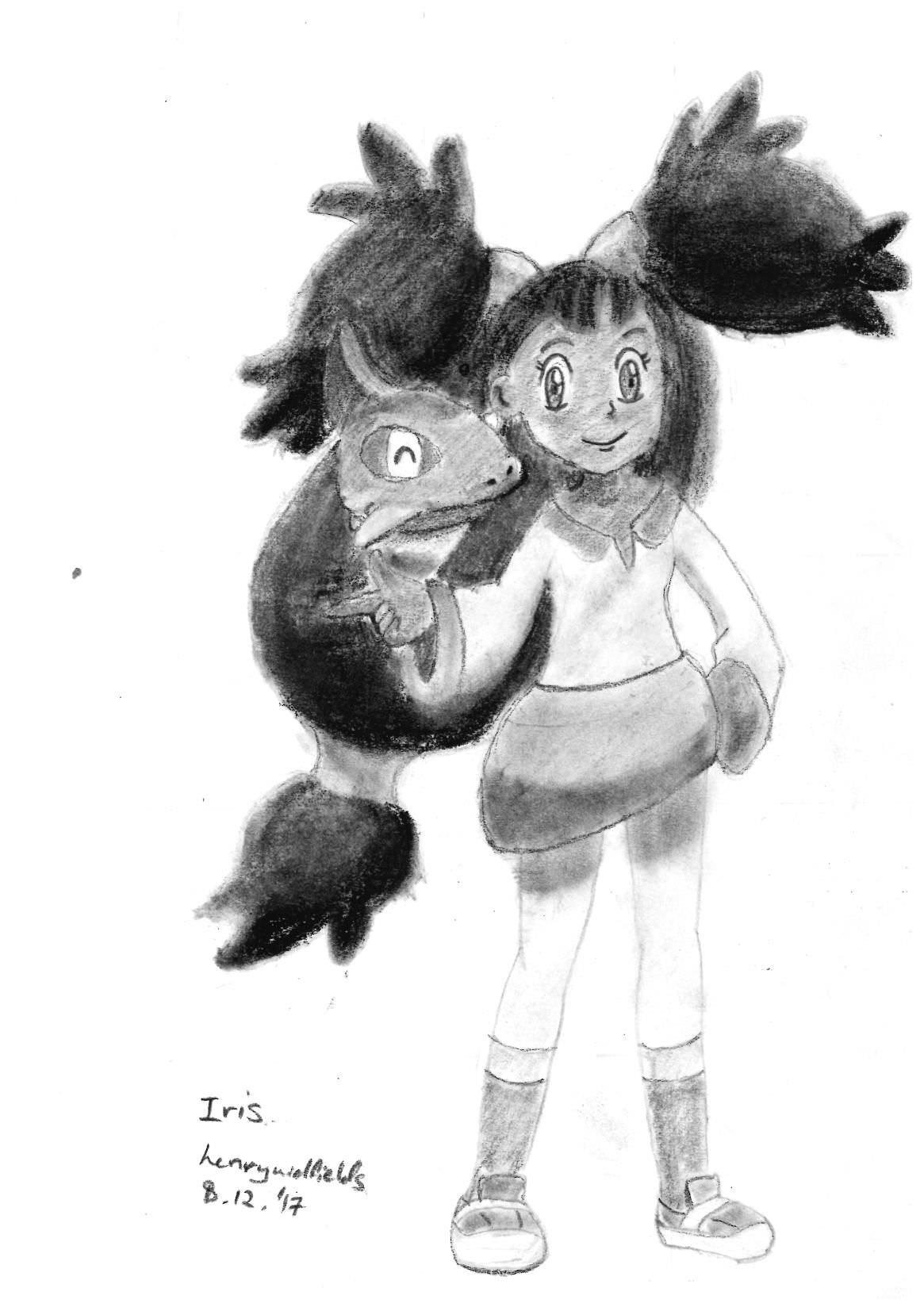 It's not very recognizable, but I actually built Iris using stick figures, and also using a larger grid. Normally, I would use 3cm x 3cm square grids for most other characters, but here, I decided to go for 4cm x 4cm. Ironically, I haven't seen Best Wishes at all, so I don't really have a strong opinion on Iris.
By now, I think there is a good collection of heroines from Nintendo, and especially Fire Emblem and Pokemon - my two favourite franchises. As there is a request for Sheba (Golden Sun) from a Serenes Forest member, I will draw that next. I can't guarantee that will be done by Christmas, however...
Last edited: Dec 18, 2017
Now showcasing: Sheba (Golden Sun: Lost Age)

Gallery: 18 December 2017 - Sheba (Golden Sun: Dark Dawn)
This is possibly my final upload before the year ends. In fulfilling a request from Rezzy of Serenes Forest and as a Christmas present to her, here is my arrangement of the official artwork of Sheba from Golden Sun: Lost Age. 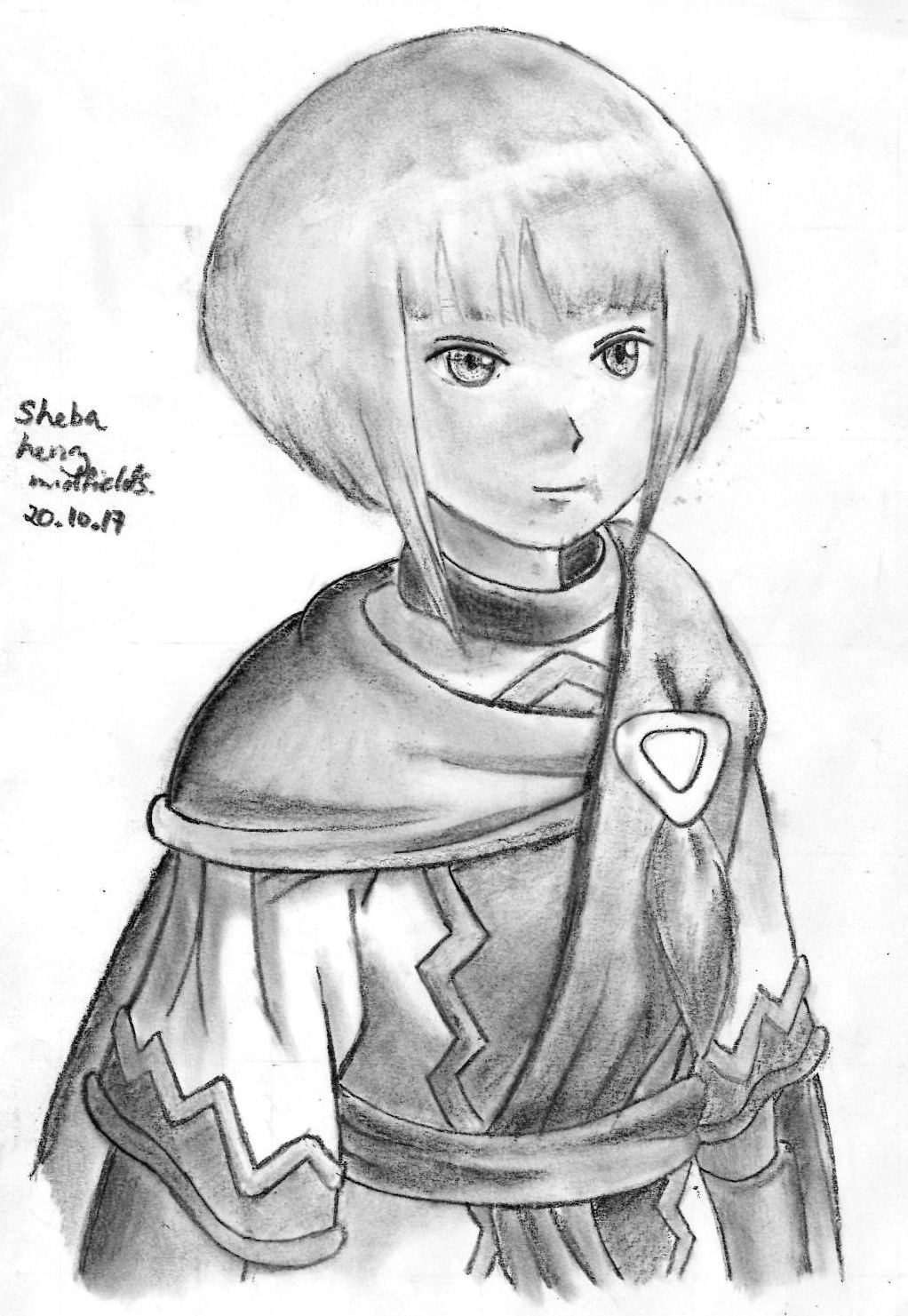 And now that is out of the way, I might as well pay tribute to her, who is another Serenes Forest artist. (Update: Though unfortunately it looks like the majority of her earlier images got removed by Photobucket...) For FE Fans, I strongly suggest having a look at her custom chibi FE Heroes characters at the end of page 12 and almost all of page 13, because Titania and Camus looks both sexy and adorable as heck. Link below:
Rezzy's Art Gallery
Last edited: Dec 18, 2017
Threadmarks
You must log in or register to reply here.
Share:
Facebook Twitter Reddit Pinterest Tumblr WhatsApp Email Link
Top