I'm hoping to have a fanfic I'm writing have a faceless unseen villain, an antagonist whom the heroes aren't fully aware of until only after the pieces start to come together, at least for a little while. But how do you do that kind of character properly?

How do you make a character so mysterious that they build up a certain amount of fear and dread, and leave you wondering "who the heck is this guy/lady?" and "What the heck are they up to?"? And while we're on the subject, how do you keep this character from suffering Villain Decay? How do you keep them menacing and intimidating throughout their entire run?

Generally, I'd say there needs to be another antagonist or conflict that serves as the focus instead. The Lord of the Rings provides a good example of this. In the books, the threat is Sauron, but we never actually see him, not even when Frodo and Sam are in Mordor itself. Instead his presence is felt in part through his servants - especially the Ringwraiths - but also through the threat of the Ring.

Essentially, you need to have enough of their influence be seen in order for the threat to be real. Either the protagonists need to know that they're in danger, or the reader does (Possibly by moving away from the protagonist's viewpoint once in a while) 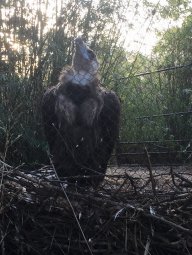 Well, you can take a few approaches. Perhaps the most famous, but by far the most difficult to execute, example is Moriarty. That involves weaving together threads throughout a narrative without making it clear there is a villain at all. And then at the end the cards are laid down and it's made clear there was a puppetmaster th whole time.

More common and easier is The Emporer approach. There exists, somrwhere, a villain of immense power who simply can't bother with the heroes directly for whatever reason and either sends servants to deal with the heroes while remaining either in the shadows or out of reach. Alternatively, they might be slowly developed and built up as a threat but he doesn't turn his sights on the protagonist until close to the end. This averts villain decay by letting the bad guy repeatedly win against other people and only lose once in one heck of a confrontation.

That's just two paths, though. There are many ways to do it.
P

You could go for a puppet master approach. There is a villain known to all, but behind the scenes they are being made to perform these actions. This isn't a new concept, it's been done to success and fail many times before. The key to success lies in the "why" more than the "how".

Perhaps this villain isn't a threat on their own and prefers anonymity. Perhaps this villain sees their goals realized more effectively if they are an unknown factor. Perhaps the villain plans to fail and instead wants the blame shifted to someone else. Money, power, influence, the options are there, but its the "why" thats really important.

The original Godzilla does this really well. You don't get to see Godzilla much until the late second/third acts, but his presence is clearly felt, thanks to the destruction he leaves in his wake as he heads slowly but inevitably toward Tokyo. We only really ever see the aftermath, such as ships sinking and the only survivor of any of these ships being rescued but subsequently mysteriously dying (of radiation poisoning, is the implication), and then the destruction of a village during a nighttime storm, where houses are crushed and wells on one side of the island being contaminated by radiation. On this island, we get our first glimpse of Godzilla, when he peers over the crest of a mountain and roars at the villagers below, and the disappears into the water. Then we have the naval bombardment of Godzilla, but never actually see him... until he shows up in Tokyo Bay, scaring the living daylights out of some people on a pleasure cruise and disappearing again. Then after more military countermeasures are put in place, Godzilla finally turns up in the Tokyo harbor and totally wrecks it, and returns to the sea. Then we get even more military countermeasures, with the giant electrified fences and cannon emplacements and tanks and machine guns, and finally, finally, we get to the climactic rampage, where Godzilla returns to shore, shrugs off the cannonfire, tears through the fences and proceeds to turn a city of millions into a sea of fire. He's drawn back to the sea by jets after this, and the next time we see him is at the bottom of the bay, where a horrible secret weapon is used to destroy him.

So Godzilla only shows up five times in his first titular movie, adding up to about twenty total minutes of screentime in a 90-minute movie. His presence is felt throughout the rest of the movie by showing the destruction in his wake, humanity's attempts to figure out what's causing the aforementioned destruction, the debates about how to respond to his existence and approach, and then the actual response and preparations. The movie presents an ethical dilemma that echoes throughout itself: should Godzilla, being likely the only of his kind, be killed; or is it worth the risk to try to contain and study him? There's so much going on in the movie dealing with Godzilla, even when the big guy himself is not around.

Jaws is kinda similar, though I've gone on long enough.

Srebak said:
I'm hoping to have a fanfic I'm writing have a faceless unseen villain, an antagonist whom the heroes aren't fully aware of until only after the pieces start to come together, at least for a little while. But how do you do that kind of character properly?

How do you make a character so mysterious that they build up a certain amount of fear and dread, and leave you wondering "who the heck is this guy/lady?" and "What the heck are they up to?"? And while we're on the subject, how do you keep this character from suffering Villain Decay? How do you keep them menacing and intimidating throughout their entire run?
Click to expand...

This is v late but hey.

My suggestion would be to have small, regular (every 5 or so chapters) segments of your fic where you dedicate a small section to the villain, and what they plan to do next, and how it is relevant to your characters. Bonus points if you manage to share parts of your villains motives and reasonings without making it massively obvious that you're pointing that straight out.

Example: say your villain is working to save his daughter from an illness. And he's stealing money/getting into crime to afford her expensive treatments. Have your sub villian ask your big villian how the treatments are going along and if she's doing okay. Yay for evil camraderie.

You also need a good reason why your villain can't just go up to your protagonists and off them right off the bat if he is powerful enough to do so - maybe he's a popular politician? Or a well known trainer? Having them serve as a public face would stop them from acting malevolently toward your protags directly. He'd have to do so through other means - ie, villians of the day, or recurring villians that work for your big bad.

Or maybe your main villain is more brains than brawn, and is a mastermind behind a group of powerhouses who are the muscle of their operations. They don't personally have the power to defeat your character, so use others to do it for them.
A great exampe of this was from the second season of the Dragons series (from How To Train Your Dragon). The main villain (one of the Grimborn brothers) there is never seen until the last episodes of the season, but his influence is felt through-out the series in many important characters.

If that's the case, though...then your mastermind will need a reason as to why his comrades/henchmen don't simply off him. Whether it be fear, or respect, or maybe they are friendly with your mastermind. They may even be family. Villainous groups bound by positive relationships are charming.

I think another way to generate mystery would be to have two villains. One is your true villain, and is often around in the background, but doesn't do a great deal for a while. They appear and disappear seemingly at random, and with seemingly no motive or purpose to your characters.
The other is your villain of the day/recurring villain - they are the ones with obvious motives and desires, and bump into your characters alot as your story progresses. As it does, your true villain's motives are unravelled and possibly made clear, and it's obvious that your mini villain is nowhere near the big bad's level of dangerous. Hiding your main villain's agenda behind another villain's agenda in the first stages of your story may work. Your mini villain may even turn out to be an anti-hero or protagonist once your real villain shows up.