Just as the topic title says, I wanted to know if anyone had heard anything about if Chuang Yi is still publishing their english version of the manga anymore, or if the company in general might be having problems? I ask because its been a suspiciously long time since they published the last volume of the series. I believe their volume 41 came out in February. As of the end of this month, October 29th, Viz is going to finally surpass their volumes (not counting those mini BW volume releases), when they release HG/SS volume 2. I also checked Chuang Yi's website and was surprised to notice that the manga that shows up on their recent release page is a manga from March *2012*!! The pages for their Sept. and Oct. "latest releases" and "coming soon" are completely blank. Also, the section for the Pokemon Adventure manga in their main catalog area only shows up to volume 40 (no volume 41 listed, even though I have it and you can find it on Ebay) and the screen caps for many of the volumes are broken links. All of these factors together make me very suspicious about what might be going on with that publishing company, and the future for their version of Pokemon Special. Its usually not a very good sign for a company if their site isn't up to date and has broken links like that ^^;;. So has anyone heard anything about this, might something have been officially announced in that country??

If they are still publishing then I can be patient enough to wait for their volume 42, rather than buying Viz's version, as I've found Chuang Yi's translation for the most part to be better than Viz's, and they haven't screwed up the chapter and volume numbering like Viz has. But if their translation is being cancelled, then I'd like to know so I can switch to the remaining alternative.

I don't know if thery are still publishing Pokémon Adventures. The only way to know that for sure is to contact them and ask them. If you do that, please post their reply in this thread (I want to know as well).

Chuang Yi's website was at one point hacked and spammed with malicious code + ads for buying pills online. It took them over a month to remove it. They didn't even take the site offline. And the Pokémon Adventures section on their has been stuck at volume 40 since at least last year. To me it seems like they are just too lazy to update their site.

Yeah when it comes to volume 41, Chuang Yi is better than VIZ in all aspects.
M

I just went to their website and it led me right to an advertisement for pills.
V

Their website has been hacked for quite awhile now.
I live in Singapore and I'm able to check, but I haven't been to a book store for awhile.
Though last I checked, it's still at Volume 41. 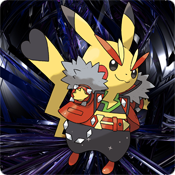 i've ordered from them recently so i can confirm they are still in business - they write back really fast so i'd just send them an email. i know they haven't updated their fb page or website in like a million years since it was hacked :/
M

bluesun said:
When parts which hadn't been translated yet here were brought up (vol.42+), people shouted out ◇▼◯×⌘△※〜〜〜!!!(Hurry up and release it!!!, my interpreter translated), and I thought, wow, it's the same everywhere.
Click to expand...