(Note: If you've been following my blogs, this will be what I want the eighth generation to be like. This "LP" or sorts will be of Pokémon Order. Pokémon Chaos will be on a different site at a later date.)
Intro:
A wheelchair-bound, dark-skinned youth in a lab coat appears. His wheel-chair looks well-made with all-sorts of gadgets, some made to move around, others with varying scientific purposes.

This is professor Robert Maple, as he introduces himself, welcoming you to the Nogland region.

"It seems you and your Dad are moving from Hoenn to Nogland tomorrow! It's the beginning of autumn here, and the leaves are changing colors, and budding Trainers like yourself will be heading to the Pokémon Carnival for some fun! I hope to see you there after you've settled in! I want to give you a Pokémon for your journey! Please tell me your name and gender." Professor Maple says.

"Oh, so you're a young man named Dennis. I'm so sorry to hear that your mother passed away. You and your dad must be going through a lot. Here's a little advice: The Pokémon Carnival has been cheering me up every year it comes to Leximus Town, which is also where you'll be staying before you go on your journey. See you soon!"


Dennis, a nine-year old boy (and our main protagonist) was sleeping in his bed, and his father's pet, a Hoennese Poochyena, was trying desperately to wake the boy up. After pawing cutely and sniffing him, Poochyena let out a loud howl.

This woke Dennis up within a matter of seconds! He changed clothes from his blue pajamas into a cap that had what looked to be a Dragonite's face on it (like one of those those "Goofy" hats you get at Disney parks, only Dragonite), a shirt with a Zebstrika pattern, blue jeans, and winter boots. He also grabbed his backpack, which was red, and darted downstairs.

"Oh, Dennis, you're finally up!" His father laughed. "The Pokémon Carnival opens in ten minutes in the center of town! Why don't you head over there while I take Poochyena for a walk."

Poochyena barked happily, with Dennis's father shushing it as Dennis headed out the door silently but in a rush.

Dennis didn't take long to find the Carnival grounds. He just had to follow the smell of Nogland's famous Salty Chowder.

There were all sorts of fun activities at the Pokémon Carnival. Great food, Mudsdale rides for the kids, a replica of Unova's famous Ferris wheel, bumper cars, a "fishing game" with little plastic Magikarp, and even what seemed to be a very special petting zoo where Trainers get to meet their first Pokémon.

Dennis pondered a bit, observing each species, until he could finally make a decision.

Which Pokémon will he choose? (Winner of the poll above this post will be his starter, and two rival Trainers will pick from the others) 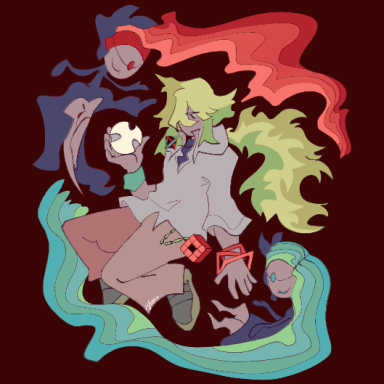 ready as i'll ever be

Heads up, I am old granny who does not follow blogs. ANYWAY.

I like the setup of this -- fakemon regions are typically hard to pull off because of the sheer amount of lore that you need to incorporate. It's hard to tell how much you've built from just this chapter, but I like the designs for the new professor, the starter, and the littler carnival you've got. It's easy to just focus on the Pokemon/physical appearances of things, so having your first city with a little bit of character is pretty awesome. That being said, I honestly don't know enough about the region to say much else.

You kinda toe this line between games and reality. Most of it seems pretty realistic, but then you've got the professor appearing literally out of nowhere and then leaving as if this is a normal occurence -- while this works fine in the games, it doesn't translate very cleanly to fiction.

Overall, this is an interesting first chapter. Not much meat here, but there's enough to pique my interest.

Just a heads up, the current poll for this thread closes tomorrow around this time. So if you'd like to decide the starter our hero will pick, please do so soon.