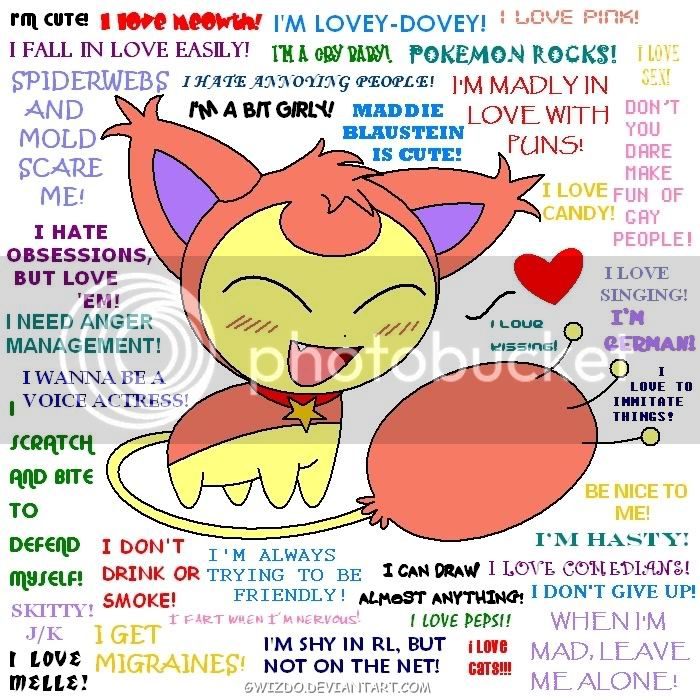 Aw..that is as cute as a button! XD I love the colouring and different uses of text.

I shall reward you with my benevolent holy THUMBS! d ^_^ b
M

Here are some other pictures:

You're a really good artist. Very cute too and your obsession is interesting. I too have an obsession with Shinji (Pokemon). He's in my avatar and sig.

uh about that Meowth Skitty pic, Skitty is licking in a weird area....
O_O
W

I love both of your pics.

And, I have to agree with Crystal Clair. Where Skitty is licking Meowth...ew and weird!
M

*sigh* I was afraid that would happen....

Instead, I'll put different pictures there...

AW... this has KAWAII printed ALL over it! XD *huggles pictures*

You are one truley talented artist hun

Keep Up your Artistry,

LOL! Now I have to see that forbidden picture! I was already thinking that some of the pictures were already a little racy... but this is better than a wailord. As for the pictures themselves, good as always! I liked the design touches you put on skitty (I think it's cuteness is improved), but all in all your pictures are rather accurate to the anime.

I don't want to sound.. um I guess some kind of rude.. but I think you pictures can rank up there with some of Pokesho's pictures!

Great job on all your fanart! You're very talented, and they are all so cute!
M

so much awesome and cute in one thread!
*dies*
M

Yeah I saw the pic... Skitty IS licking in a weird area... Thankies for PMing the pic. It made me laugh. Mind if I PM the pic to Glacia?
C

Nejitard said:
Yeah I saw the pic... Skitty IS licking in a weird area... Thankies for PMing the pic. It made me laugh. Mind if I PM the pic to Glacia?
Click to expand...

Drew THIS one by looking at a screenshot, just to see how accurate I can get it...

Awwww! It's still as cute as always!
W

Aw, they're all so cute!