As people saw on Sarah's website pokemon.com has confirmed the title for the movie to be Giratina & the Sky Warrior and set be on DVD soon. 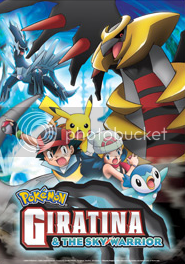 Seems like a reasonably good title, though I really hope that isn't the final cover art. It's so... blah.
L

So I wonder if the Pokémon logo being small and in the upper left corner is going to become a theme for the movie logos from here on out... At least this time they have Giratina's tentacle things to the right so it doesn't look too unbalanced.

And yeah, I pray to Arceus that's not the cover. It's not exactly terrible, but they have much better options to choose from. Since they usually go with the poster, I was hoping they pick that, especially since Movie 11's poster is rather cool-looking. The Japanese DVD cover would work too, since Movie 11 undoubtably has the best of all eleven movies.
C

Its kinda amusing how Brock can't even make it to the covers of Pokemon movies anymore. Its like nobody cares about him.
W

Scott85 said:
Its kinda amusing how Brock can't even make it to the covers of Pokemon movies anymore. Its like nobody cares about him.
Click to expand...

What do you mean by that? If it is really true that nobody cares about him, then, he'd have been rubbed out from the anime for some irrational reason but yet it didn't happen.

Back on topic, I found the poses for Ash and Dawn so strange...and apart from Brock...where's Shaymin????? There's still somebody who cares about Shaymin, right?
L

Hm. If Shaymin's the star of the movie.. Seriously, where IS the li'l hedgehog? They should rub out Batman from his movie posters. OHWAI-
J

I think it's just a quickie art. Not the official one. Just to confirm the name.
R

Yeah, Shaymin isn't included in both the cover and the title, how strange?

I don't see a reason for not including Shaymin if Dialga is included in the cover.
M

I guess they're following the way the Japanese did it and want to tease us with part of the movie before they reveal Shaymin. Perhaps the full title of the movie is Giratina & the Sky Warrior Shaymin?

I'm just grateful we don't have to hear "One" in every single ad for the movie.
P

Scott85 said:
Its kinda amusing how Brock can't even make it to the covers of Pokemon movies anymore. Its like nobody cares about him.
Click to expand...

If I'm not wrong only Ash appeared on most of the Japanese movie DVDs
So it's no surprise Brock isn't there and also not a surprise Dawn is...

http://www.pokemon-movie.jp/dvd/2008.html
Click on the links at the bottom of the page to see the covers of previous movies
For movies 1-3 all the twerps are shown (except Tracey who doesn't appear on the cover of movie 2 while Oak does WTF) but Ash is clearly showcased as the more important one, for 4-5 only Ash, 6 Ash and Max, 7-8 only Ash, 9 Ash and May, 10-11 Ash and Dawn as equals

This is another reason why I insist on this "Dawn might stay" thing... I know some people are sick of this but seriously I'm not worse than how Scott find his ways to bring his opinion about Johto every second thread (just an example Scott, nothing against you)

Obviously they won't show Shaymin right now just like the Japanese won't talk about Arceus until they'll decide to reveal them
I think some people forget we aren't supposed to know about them (and actually I hope they'll do something next generation to prevent people from finding about them... I'd really like to be surprised and get a few new Poké during the wait for next generation)

Why are people acting like the DVD cover of a foreign dub is some indication of the characters' importance in the original series?
P

What? I talked about the Japanese covers

Guess I shouldn't just glance through threads then...
N

I really, really hope this isn't the final art.

The idea that PUSA would try selling a DVD using only the "star" characters (Ash, Dawn, Pikachu, Piplup, Dialga, and Giratina) is really annoying, especially considering SHAYMIN is the star of the movie. It seems like they're trying to hard to sell it and Shaymin got clipped off the cover for the same reason Nelvana neutered Card Captor Sakura- because 8-10 year old boys wouldn't be interested in a movie with a cute flower hedgehog.

But why they omitted Brock is beyond me.
P

I doubt Shaymin won't appear on the eventual DVD cover... we simply aren't supposed to know about it yet so they'll probably change that after Shaymin will be officially revealed in the US
J

I don't like how you call Brock a sidekick, but I won't start an argument over this. There are others you can call sidekicks as well. I'm backing off before I begin...
N

I doubt Shaymin won't appear on the eventual DVD cover... we simply aren't supposed to know about it yet so they'll probably change that after Shaymin will be officially revealed in the US
Click to expand...

Except that Brock and Dawn are BOTH sidekicks more or less. And I'm looking at the Jirachi DVD on my shelf, and Ash, May, Brock, and Max are all on there. So is Jirachi (that movie's "cute Legendary").
C

Is it coming to CN first?
N