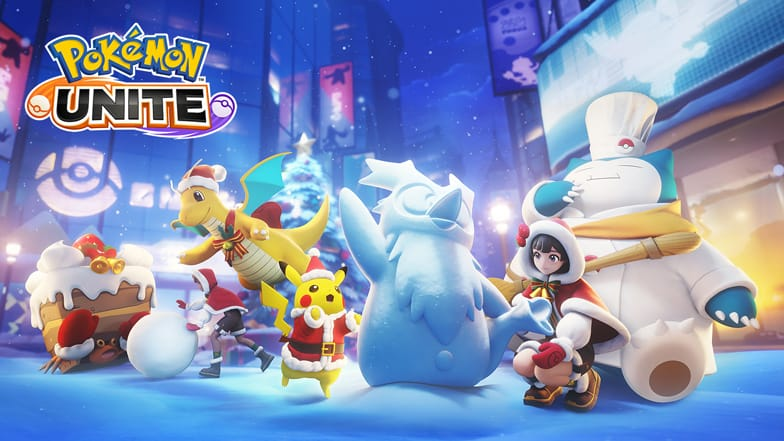 Following on the heels of their Halloween Festival in October, a new in-game event has been announced for Pokémon UNITE to celebrate the festive season. As with the Halloween Festival, this new event will feature new ways to play, new holowear, and new customization options for trainers. Two new Pokémon will also be joining the playable roster alongside this event, with Tsareena entering the arena on December 9th, and Dragonite joining the fray on December 20th. 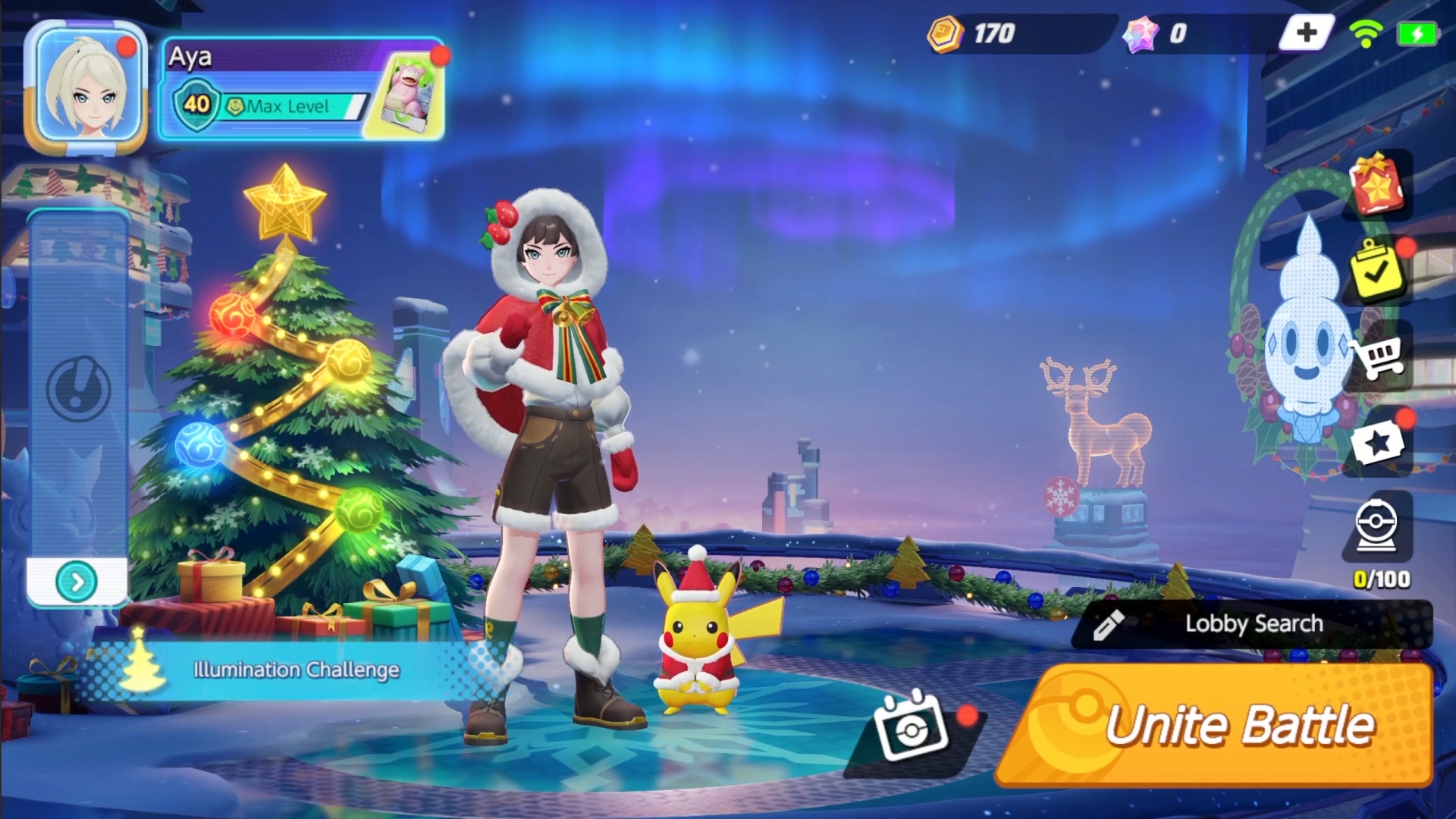 Graphical Changes
While the main event doesn't start until December 15th, the game has already received a number of temporary changes to the user interface for the holiday season, with seasonally appropriate imagery for the login and main menu screens, and some icy winter theming for Remoat Stadium. 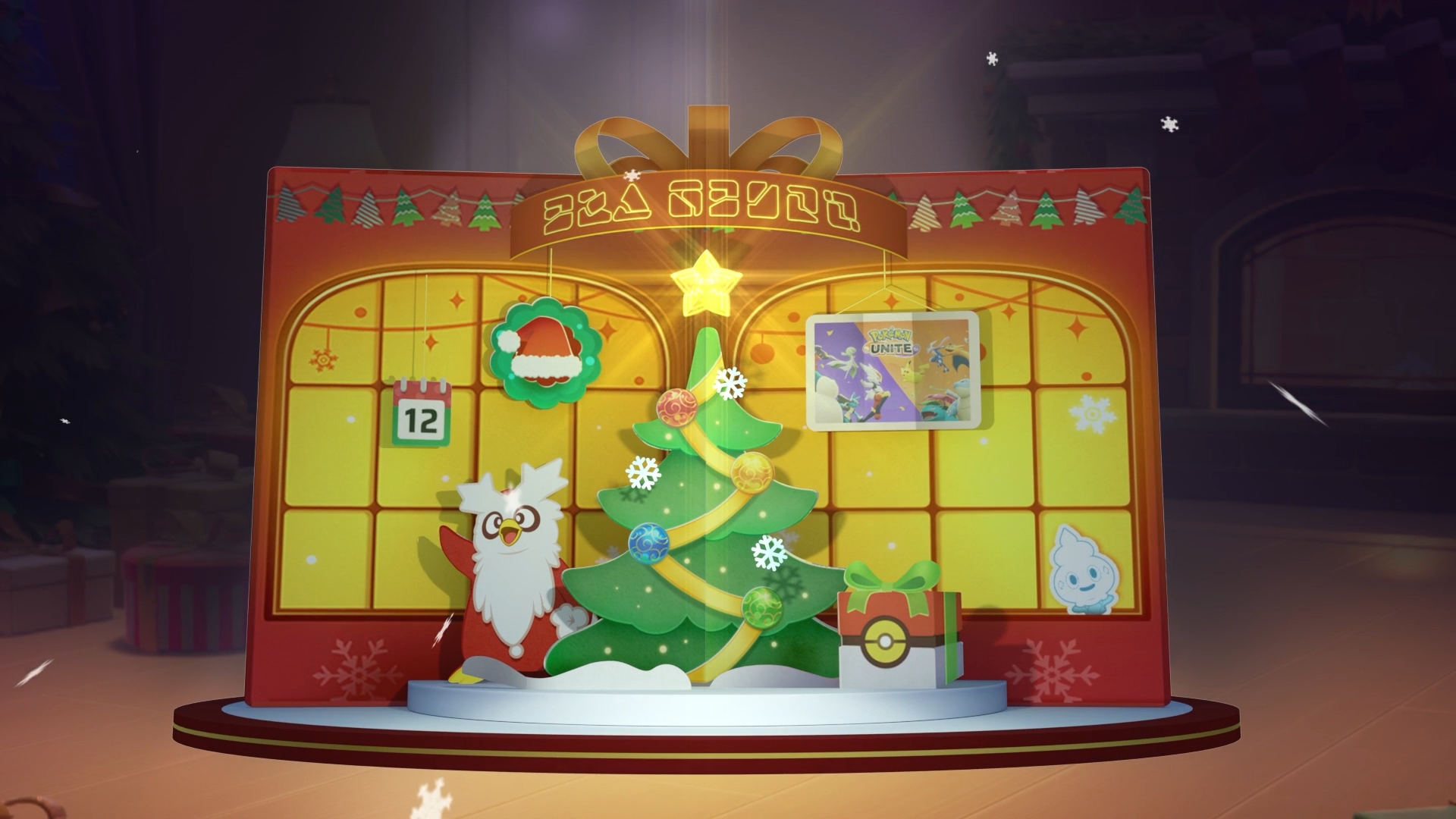 Lights, Illumination Challenge, and Log-in Bonuses
Starting on December 15th, the Illumination Challenge sees players given the task of lighting up the festive tree that appears on the main lobby screen. Players can do this through completing daily missions associated with the festive event that allow players to earn Lights, a special in-game currency required for players to purchase a variety of rewards tied to the event, including decorative and cosmetic items. A maximum of 100 Lights can be earned per day through daily missions, while additional challenge missions enable players to earn up to 750 Lights per mission.

An additional Photo Challenge will open on Christmas Eve, running through to January 6th. In this challenge, players need to acquire snowflakes by battling across all game modes, in order to complete a seasonal art piece and earn a variety of in-game rewards.

Between December 24th and New Year's Day, players will also receive daily log-in bonuses including Aeos tickets and items enhancers. Special gifts will also be offered which allow players to select a single item from a limited selection. From December 25th to 28th, players will be able to receive presents of either Aeos coins, Holowear tickets, Aeos tickets, or item enhancers. From December 29th to 31st, players can receive a 7-day limited license for their choice of one of six different Pokémon. Last but not least, on New Year's Day, players will be offered a selection of four exclusive Trainer fashion items to pick from.

Finally, every playable Pokémon in the game will temporarily be unlocked for all players across every non-ranked game mode between New Year's Day and January 3rd, offering both new and old players the opportunity to experiment with the game's full roster.

Snowball Battles in Shivre City
Alongside the Illumination Challenge, the event features a special limited time quick battle mode, with new game mechanics tied to the event. All of these battles are held in the seasonally appropriate Shivre City arena, which gets a facelift for the event with an additional covering of snow over the map. Completing battles in this mode will be required to complete many of the missions needed to acquire Lights.

In this mode, Pokémon that have been knocked out are temporarily turned into Snowmen. While transformed into Snowmen, Pokémon will be stuck in place, with their basic attack changed to only allow them to jump in the air, and moves altered to allow them to take on a variety of poses to give some visual support to their team.

Several changes are also made to the wild Pokémon, with Delibird making its debut in Pokémon UNITE. Defeating Delibird awards players with a gift box, containing a one-time use battle item that replaces the player's currently selected item. The Avalugg in the center of the map is also replaced by Articuno, offering players a new challenge as they fight to secure victory. 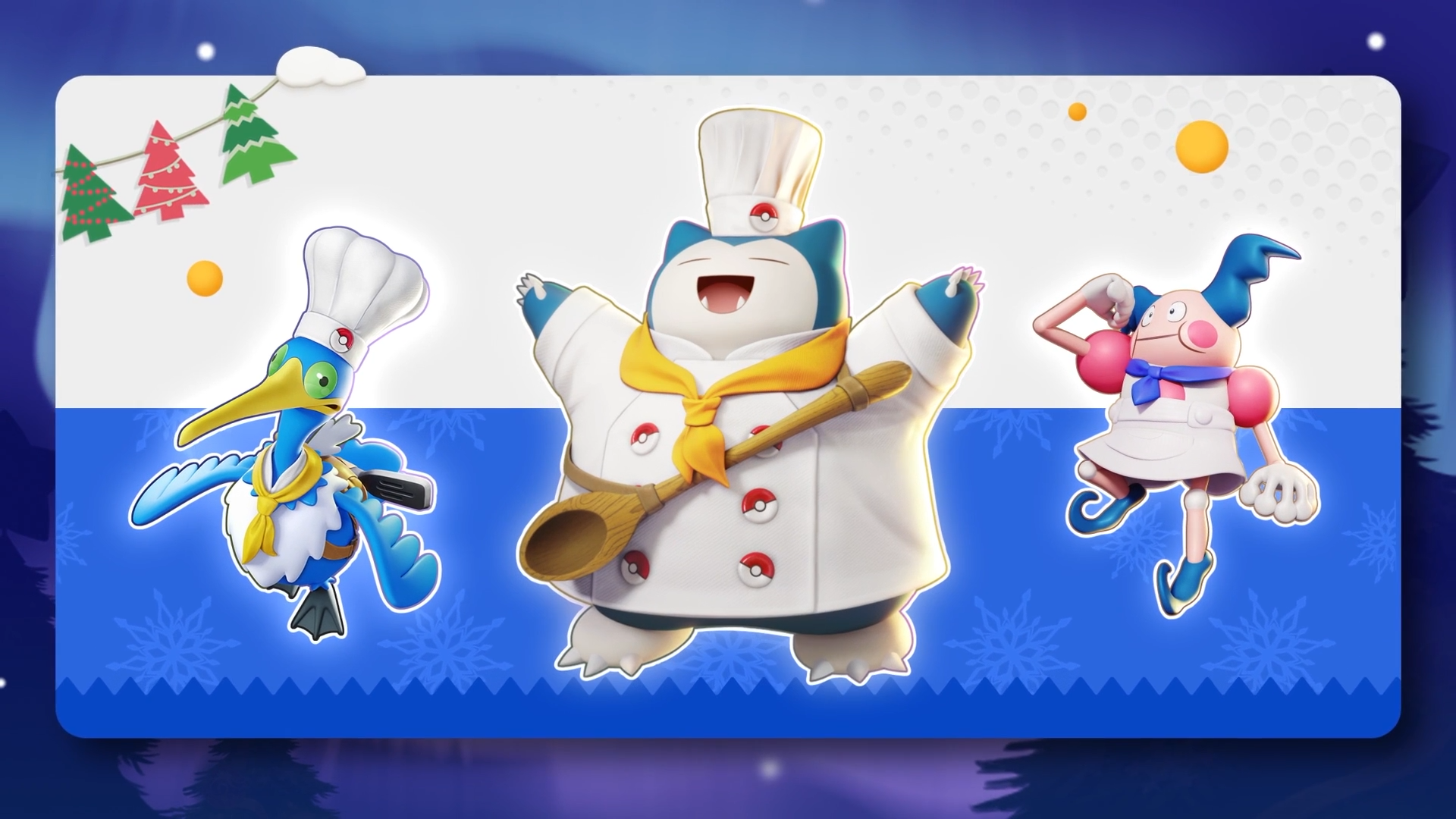 New Cosmetic Options for Trainers and Pokemon
A variety of new cosmetic options for both Pokémon and Trainers are being added with this event, with two broad themes. Firstly are a set of festive themed clothing items and Holowear, with trainers able to acquire Santa cloaks for themselves, while a variety of Pokémon will gain a Holiday style with a Santa Hat. Pikachu's Holiday style will also include a full Santa Suit.

The second themed collection of player costume items and Pokémon Holowear centers around cooking, specifically baking cakes. A variety of clothing items are being added to allow Trainers to dress up as chefs. Cramorant, Mr. Mine, and Snorlax will also be able to join their Trainers in the kitchen, with each be able to dress up as chefs with their new Cook Style Holowear. Crustle will also gain a unique Cake Style holowear with a more direct link to the Holiday season, with mistletoe and bells included as decorations on its whipped cream and strawberry coated rocky shell. 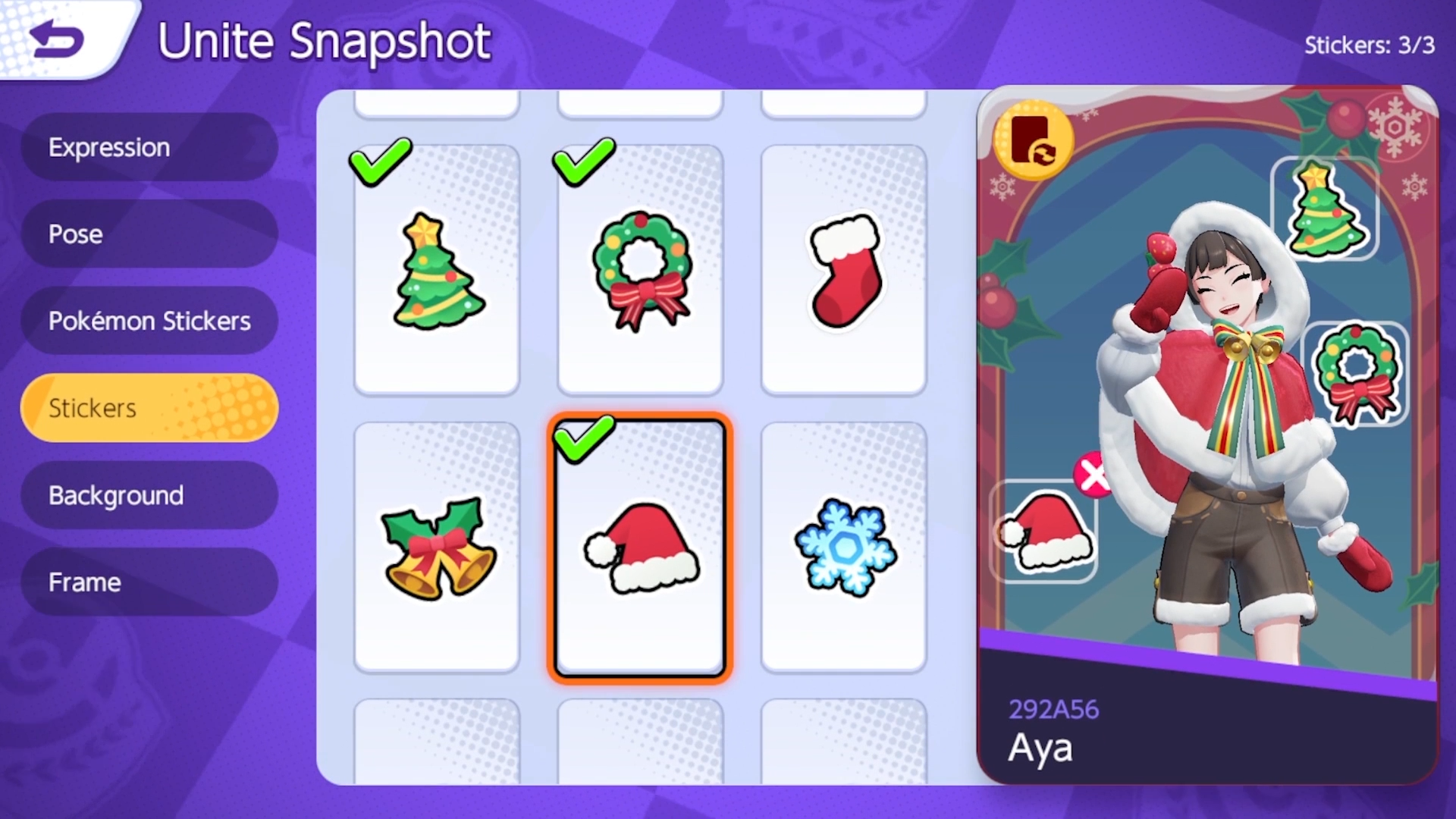 A selection of Holiday Season themed options for customizing Trainer Portraits are also being added, including a Trainer snapshot frame, background, and stickers. These can be acquired by using Lights earned through the event.

Tsareena dominates the competition
Tsarenna will be available to purchase from the Unite Battle Committee shop immediately after the Holiday Season update goes live on December 9th. While the Pokémon doesn't really have anything to do with the holiday season, this Melee All-Rounder is sure to pack a powerful kick, particularly with Pokémon UNITE's history of balancing new playable Pokémon when first added. Trainers will receive Tsarenna's UNITE License for free by logging into the game anytime between now and December 31st.

​
Tsareena begins each match as Bounsweet, evolving into Steenee at Level 4 and Tsareena at Level 6. It starts the match with the Ability Oblivious, reducing the duration of hindrances affecting them. When evolving into Tsareena, Oblivious is replaced with Queenly Majesty, which in addition to reducing duration of hindrances also grants it a buff effect to every fourth boosted attack or move. Tsareena’s boosted attack sees it lunging at opposing Pokémon, dealing damage, and lowering their Defense for a short time.

Bounsweet learns its initial attacks, Razor Leaf and Rapid Spin, at Levels 1 and 3.

Rapid Spin sees Bounsweet spinning off in one direction, dealing damage to any opposing Pokémon in its path. The move also raises Bounsweet’s movement speed for a short time when it hits. At Level 6, when Steenee evolves into Tsareena, the Pokémon can learn either Glassy Glide or Trip Kick. Grassy Glide adds an additional movement reduction debuff to Pokémon hit, as well as a boomerang attack with Tsareena returning to deal an additional shove and damage to Pokémon along the same line as its original attack. Trop Kick meanwhile sees Tsareena launching a flying kick at opponents, dealing damage, and debuffs to attack and movement speed for Pokémon caught in the attack's wake. When under the buff effect from Queenly Majesty, both of these moves grant Tsarenna a temporary shield.

Tsareena learns its Unite Move, Queen Ascendent, at Level 9. With this Unite Move, Tsareena leaps towards opposing Pokémon before kicking them into the air and delivering a blistering fluffy of kicks. Tsareena also recovers a proportion of HP after landing on the ground at the end of this attack.

Dragonite soars into battle
Dragonite will be added as a playable character in Pokémon UNITE from December 20th. As of writing, only limited detail has been given on this Pokémon. The moves used by Dragonite in the trailer include what appear to be a close ranged Flamethrower, a Headbutt, and what appears to be a Draco Meteor like attack with mechanics similar to Talonflame's Fly or Heavy Slam, which together suggests a Melee ranged fighter, but leaving it less clear as to if the Pokémon will deal Physical or Special damage. 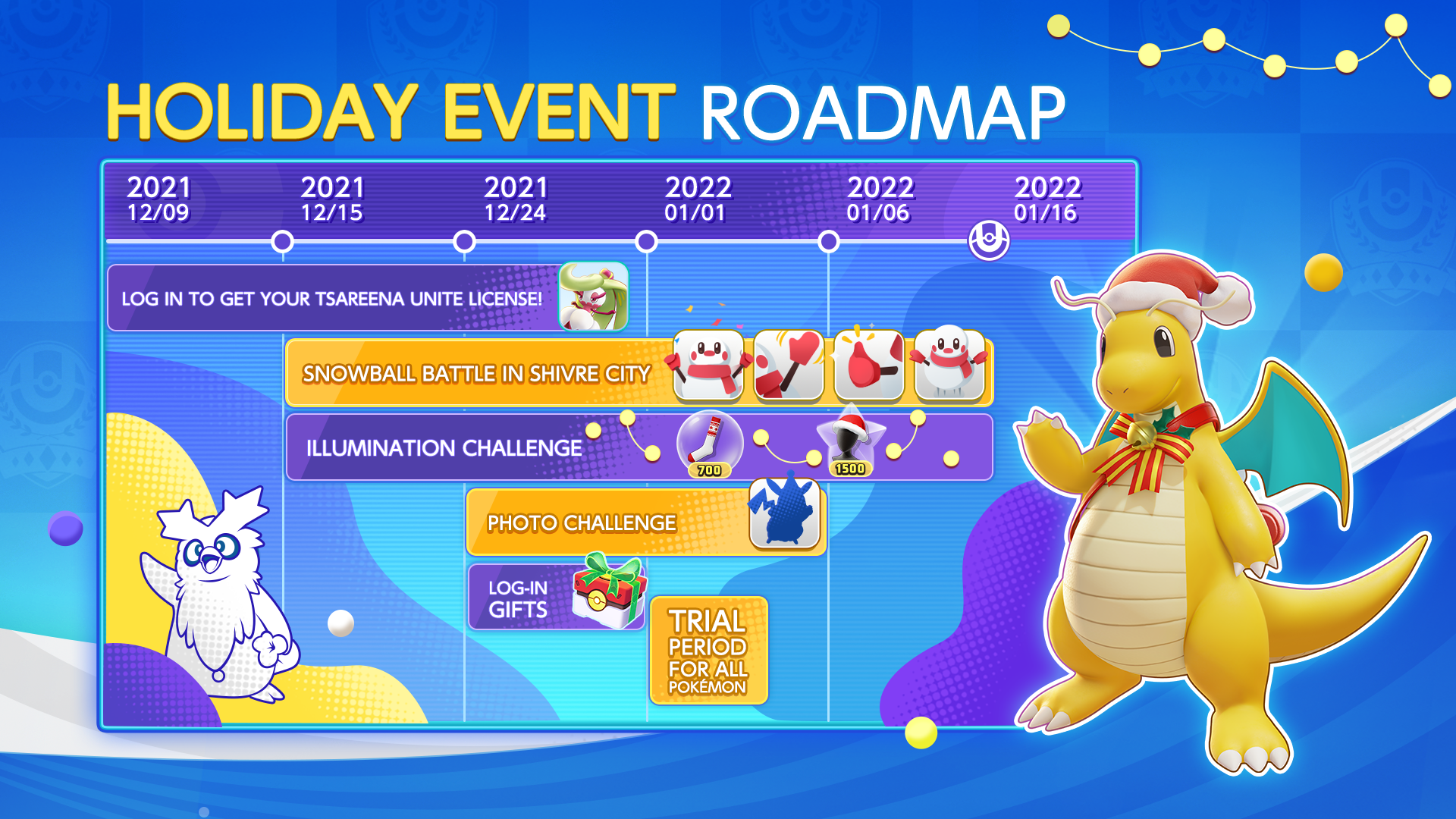 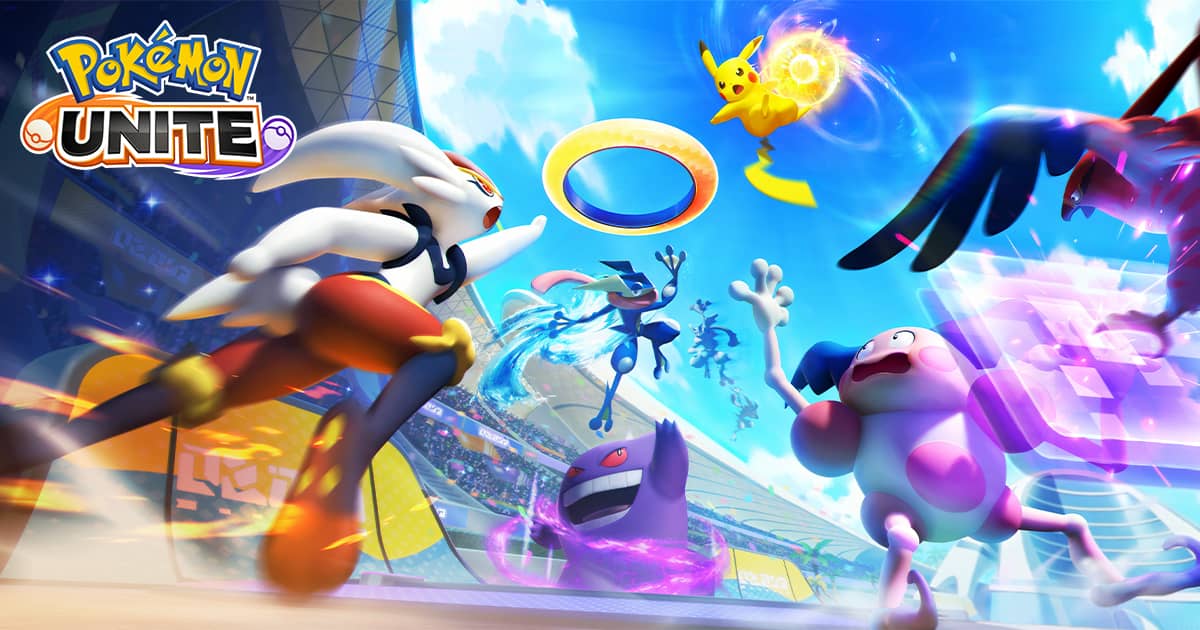 Prepare to UNITE, Trainers—Pokémon UNITE available now on Nintendo Switch and on mobile devices in September!

Prepare to UNITE, Trainers—Pokémon UNITE available now on Nintendo Switch and on mobile devices in September!