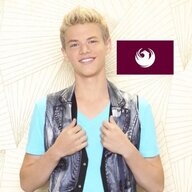 Leaks for the successor to the Nintendo Switch are not faltering even after its absence during E3 2021 has disappointed fans.

Now, the latest information about the console revealed that an NVIDIA Tegra Orin Chip carrying the "Black Knight" codename is powering the next-generation Nintendo console.

These leaks persist as the president of Nintendo of America, Doug Bowser, broke his silence about the next console, saying that a new console is still in the works.

As mentioned, Nintendo is yet to reveal details from its rumored next-gen console; Gizchina, however, made a wild guess that the gaming tech is coming by the end of 2021.

The same news website said in a separate report on June 12 that Nintendo's next-gen console is likely to sport an NVIDIA Orin chip, as a leaker suggested.

A Twitter account @kopite7kimi posted a tweet that the next Nintendo flaunts a customized version of NVIDIA chip T234, which the autopilot functions of vehicles commonly use. 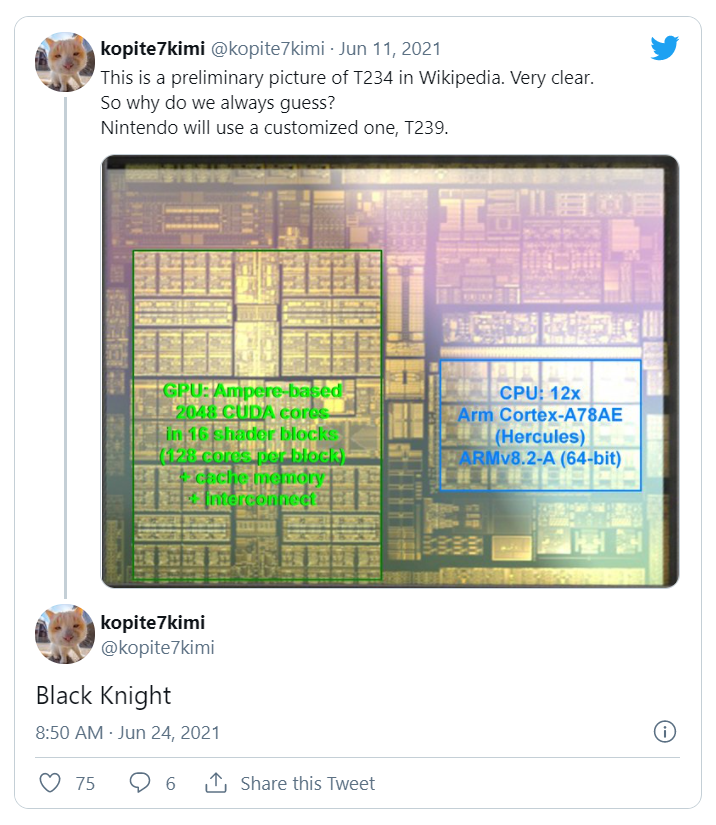 The T239 is the gaming console version of the T234 autopilot chip.

The NVIDIA Orin T234 itself already packs a dodeca-core Cortex-A78AE CPU and 2048 CUDE cores paired with an Ampere architecture GPU, and a 200GB/s bandwidth limit.

That said, the vehicle chip is 10 times more powerful than the current chip of the original Switch model, the Tegra X1.

The latter only packs a 64-bit bus and a bandwidth limit of 25.6 GB/s; the customized version's specs have yet to surface, however, but it is expected to be at the same range as the Orin T234 chip.

So, expect Nintendo's next-generation console to improve the performance of its console, which lags behind Sony's PlayStation 5 and Microsoft's Xbox Series.

Leaker @kopite7kimi revealed on June 26 that the upcoming chip carried the codename, Black Knight, as per NotebookCheck. The website added that a Twitter account @Dakhil96Gaming noted that the Orin chips mainly borrow DC Comics superheroes' names, while the mobile chips use monikers of some Marvel characters. 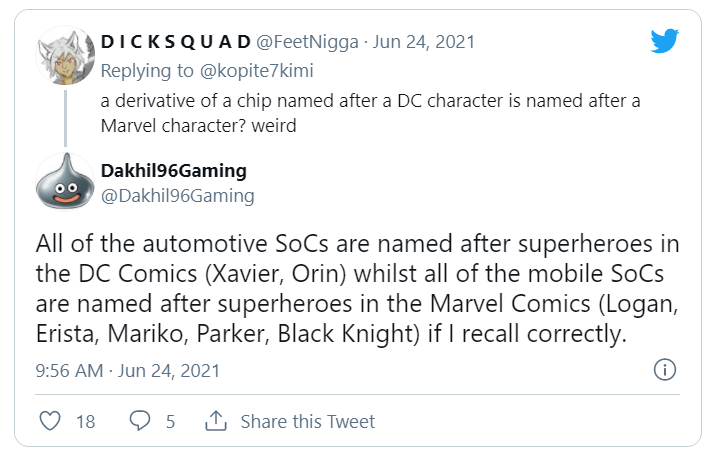 Separately, WCCFTech reported on June 7 that Nintendo's next-gen console will be boasting a GPU that clocks a 1GHz when docked.

On the other hand, the handheld mode will be at 768 MHz. On top of that, it is expected to support an NVIDIA DLSS as well.

Meanwhile, some of the Switch games that are announced at E3 2021 are linked to the actual launch of the rumored console. Some rumors suggest that the sequel to The Legend of Zelda: Breath of the Wild will be released alongside the new console, while Mario + Rabbids Sparks of Hope is reportedly the first game to embrace the next-gen console.