As far as something being realistic, I would sorta have to say that the old Iron Tail was more realistic. If you think of the glowing as really just the muscles in his tail tightening to the point of being as hard as steel, that's sorta understandable for a pokemon. His tail actually turning into metal, even with Pokemon physics or what have you, is sorta "what?". That though is more or less a gripe about a rat being able to turn its tail into steel, which isn't the fault of anyone involved in the anime. BW IT does look exceptionally better and the glowing of most physical attacks in DP and AG was terribly dumb.
M

I prefer the Black/White iron tail for many reasons already stated. It actually look like iron, and it just looks friggin' amazing. 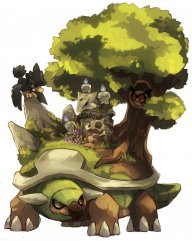 I personally think how they, in BW, they take a whole five seconds to animate the move before using it just completely ruins the flow and the subsequent nature of an encounter/battle. Back in DP and before, only epic moves received long drawn out charge-ups and everything else moved at battle pace. The only time pace was ever interrupted was for observer narration, which could be brushed off as happening at the same time as the battle action, just shown to provide detail.

I do have to admit, all of the move animations in BW are really cool and give the moves being used so much more detail, but the fact that we have to break to a close up every time is reminiscent of Power Rangers, and makes me want to hurt someone.