Pasio Eggsplorers makes a return in Pokémon Masters EX, accompanied by May and Burgh Seasonal Scouts

A selection of Easter-themed content is making a return to Pokémon Masters EX this April, with a re-run of the Pasio Eggsplorers story event. 5★ May (Spring 2021) & Lopunny and 5★ Burgh (Spring 2021) & Togepi also make their seasonal return in a dual Seasonal Scout.

Pasio Eggsplorers Event Re-run
This event, which originally ran between April 2nd and 16th, 2021, features May and Burgh hosting a seasonal egg hunt. The player joins the pair as they try and search for a young girl's Pokémon Egg that was mistakenly hidden with all the novelty eggs. The event is available in-game now, and will be running until April 17th, at 10:59pm (PT). By completing battles during this event, players can earn special eggs themed around Togepi, Buneary, Torchic, and Lucario, which can be exchanged for a variety of valuable items, including 5★ Scout Tickets. Players can also obtain Gems and Event Medals for completing special missions during the event. All rewards can be claimed even if players have previously completed the event during its original run.

As usual for events of this type, players will have an increased chance of receiving bonus rewards if they take on event battles using teams that feature specific sync pairs. The more of these sync pairs that players place in their lineup, the greater the bonus received. The applicable Sync Pairs and reward rates are as follows:
The Daily Egg Hunt Challenge! mission can be once per day in order to receive a 10 each of the basic varieties of themed eggs, plus a selection of 1 and 2★ Power-Ups, and 1, 2, and 3★ Berry Tarts. Additionally, players will also receive a predetermined Pokémon Egg. The egg available changes each day at 11:00pm (PT). While the roles and passive skills of these Pokémon are fixed, the hatched Pokémon can be either male or female (with the obvious exceptions of Tauros and Kangaskhan), and can rarely hatch as Shiny Pokémon.
Players should also note the following when playing this event:

May and Burgh Seasonal Scouts
These Seasonal Scout banners allow players an opportunity to Scout the two returning 5★ Sync Pairs featured in the Pasio Eggsplorers Story Event.
More information about each of these sync pairs can be found via the Bulbapedia links above. Players acquiring either of these seasonal Sync Pairs will also receive 3x Custom 5★ Power-Ups for that Sync Pair, up to a maximum of 15 Custom 5★ Power-Ups each. 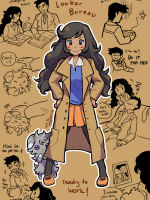