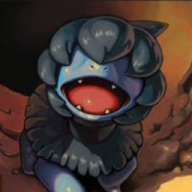 hey! i thought this blog thread concept sounded cool so i'd like to try it out! here i'll share general pokemon-related thoughts, like headcanons, playthrough stuff and my ocs/aus!

you can post/ask questions/talk here, and i'll try my best to respond! i'd like to make friends here, this can be like a little pokemon-themed hangout here's some info about my main pokemon oc to start:

his name is drake harris, and he takes the place of the protag of pokemon white. he's bianca's adopted brother and cheren's best friend, and has known them for a huge majority of his life. he has a partner pokemon named connie, a deino that he raised essentially from birth after she was abandoned by her hydreigon mother. connie is jumpy and aggressive towards most people and pokemon, but she is so bonded to drake that she dislikes being in a pokeball. drake wears a flatbill hat and has round glasses, shaggy brown hair, a faint goatee and mustache and wears a hoodie or jacket at all times. honestly he looks like he shops at hot topic. the story follows his transformation from a sheltered, timid 18-year-old man with dreams of becoming the strongest trainer into an antisocial hermit that lives in the deep marshes alone with his pokemon.

it's obviously very dark compared to canon pokemon media, and i'm still working out the details of the more realistic world it takes place in. it has general pokemon logic, but it's much less forgiving. it's a bit harsher, a lot less upbeat, and pokemon can die (rarely, they're very tough and heal near instantly with immediate care). but it's not edgy and grimdark, it's more just pokemon but pg-13

drake ends up in a bitter rivalry with ghetsis, and eventually defeats him for good many years after the events of pokemon white. he also steals ghetsis' hydreigon lol. the story has a focus on his friendship with cheren and bianca, and his growth as a person! i think about him every day

obviously i'm a big hydreigon fan and i love gen 5! i'm always down to talk about those hope you guys are having a good day/night/morning/whatever!

today someone noticed my pokemon hat and showed me his lugia tattoo!! it was in full color too, looked incredible. it's only strengthened my desire to get a hydreigon tattoo on my upper arm, but i'll start with a smaller one before i go for something like that.

i ran into a roadblock in my randomized heartgold playthrough, a single rocket grunt in mahogany that sends out giratina, then kyogre. it wasn't a huge issue, especially with my water absorb tangela, but the giratina was annoying enough for me to take a short break. i hope i get good rng for the elite four coming up lol

i was thinking about pokemon types, and i can't think of a single pokemon that completely changes type upon evolving. i think it would be very interesting to see an evo line that goes from, for example, fairy to dark. maybe pure fairy, then fairy/dark, then just dark. but that would be rather inconvenient with losing the stab fairy attacks, so i see why they haven't done it gameplay-wise. still, the idea of a pokemon going from one type to a completely different one is conceptually pretty cool!

i was also thinking about how cool a fairy-type hydreigon line could be! i think it deserves to be given that type after what they did to it in gen 6, making it go from unstoppable to quad-weak to one of the best types in the game. i would love it if it had butterfly wings!! a good second type for it could be ice, or maybe fire? fairy/fire sounds like a cool combo