​
Hi! My name is Professor Oak. They call me The Pokemon Professor. Welcome to the world of Pokemon! As a trainer, your job is to train Pokemon, and participate in battles! If you get good, you might even get to go to the Pokemon league! But before I can give you your license, you have to fill out this form.


Name: Everyone's got a name, right? If you don't, or simply don't wish to provide one, a nickname is okay as well.

Age: Probably gonna be somewhere around 10, but if you're a middle-aged man following a bunch of 4th graders around, I won't judge.

Class: What sort of trainer are you? Cool Trainer*? Bug catcher? Breeder? Coordinator? This section is optional.

Appearance: Whatever you feel gets across how you look. No length requirement, and a picture is acceptable as well.

Personality: Optional. How you act.

History: Optional. It's okay if it's short, you're probably just a kid.

Starter: Only first evolutions. Doesn't need to be from Kanto, though. If you leave it blank, I can randomly assign one to you. Your starter need not be one I've given to you, and could have been recieved prior to you officially becoming a trainer.
If you need an example, here's a copy of a sheet another trainer filled out.

Appearance: Reflecting his laid-back nature, Chris has a somewhat unkempt appearance. His black hair is always somewhat tousled, and he tends to wear loose, comfortable clothes. He's a bit on the tall side, but despite his hobby as a gourmand, he's fairly lean. He has a smattering of freckles across his face, and is rarely seen without his favorite straw hat.

Personality: Christopher is a very laid-back person. He can work hard, if he's very passionate about something, but that's rare. He really likes Pokemon, and feels like they can sometimes be better friends than humans. He's a gourmand, and enjoys trying new foods.

History: Chris is the youngest of several siblings. His parents are both great chefs, and that gave him a deep appreciation for food. He became a Pokemon trainer because it would give him an excuse to hang out with his Munchlax, and let him travel the world and sample all kinds of new foods.

Starter: Max, a Munchlax
As a trainer, there are a few rules you must follow

-Keep things PG-13ish.
-No god modding. Try to keep your team's power level at a reasonable pace. Like, no catching a Dragonite just outside of Pallet Town.
-If you want to fight a gym leader, either you can write it yourself, or have someone else play as them.
-If you wish to be a canon trainer, such as Gary or Silver, that's fine, but you have to keep them at the level of everyone else.
Oh, and the most important rule: Have fun!
Last edited: Feb 21, 2015

Sure, although there's not much need to. I do have the start-up written already, but I intend to post it in a week. I have no interest in closing sign-ups. 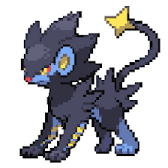 
Heroic Sociopath said:
Sure, although there's not much need to. I do have the start-up written already, but I intend to post it in a week. I have no interest in closing sign-ups.
Click to expand...

Quick question - If we are going by Kanto, what are the Pokemon like? Are we doing it like First Gen or 3rd Gen FR/LG? Like in terms of Pokemon around the area and what we can pick for a starter.
H

Any Pokemon is acceptable as a starter. As for wild Pokemon, mostly ones native to Kanto. However, feel free to get Pokemon from other regions so long as you can make it make sense. Like maybe you could get a Spinarak by mail ordering eggs, or rescue a Mudkip from Team Rocket.

Appearance: Donna is part of a family where everybody is tall. This means that she is tall for her age but she is going to grow like heck when she is older. Donna has long lightish blonde hair, it is like a blonder version of platinum blonde. Maybe a Sandy blonde type of color. Anyway she wears in different styles because doesn't like to stick to one. Donna has dark brown eyes and likes to wear different attires.

Personality: She can come off a little bit like a ditz as she isn't the smartest out there and does that the tendency to say lot of stupid stuff. Donna is critical but really nice, she means well but she can say some mean stuff accidentally. She has champagne taste with beer money, meaning she loves the rich, fashionable stuff but doesn't have the money for it. Donna is an outgoing, social person and nice but she rambles a lot and generally goes with the flow. She loves to try new things though. She is a very good surfer and gymnast to boot.

History: Lone child of a Gym Leader in a far off region and a preschool teacher. Parents a bit over protective but that's really it. She had
a great childhood somewhat.

Aimless Traveler in Time and Space

Class: Trainer, but has some interest in coordination

Appearance: Mina has shoulder length, dark brown hair, and dark green eyes. Due to not being outside often, she is somewhat pale. She usually likes to wear different kinds of hats, though usually tends to stick with a black beret. She tends to wear more form-fitting outfits, and sometimes wears glasses in an attempt to look smarter.

Personality: She is somewhat shy, and is usually not the one to start a conversation, but tends to be more outgoing around people she knows. She is also somewhat lonely, so to compensate she tends to leave her Mawile out of its ball usually. She loves being around Pokemon, and is able to be herself around them. She has a tendency to be overly cautious, and sometimes over thinks things. Initially, she may come off as cold, but she usually has good intentions.

History: She was more accustomed to just staying inside reading, watching TV, or playing video games. But she had a feeling that her parents wanted her to go out and try new things. So to make them happy, and to satisfy her own curiosity about the world, she decided to become a trainer, and once she feels ready, to try traveling around many different places.

Personality: To be revealed, sooner of later.

History: She doesn't really like divulging her history to strangers.

Appearance:
View attachment 97335
Personality: To be revealed, sooner of later.

History: She doesn't really like divulging her history to strangers.

Credits go to the artists who drew them. Hiro has a scrawny build and is often nicknamed skin and bones. He is suprisingly strong, despite this. He is lean and has scars all over his back and front but doesn't show people this. He is often seen with filth marks on his face and an evil/mischievous look on his face - you better watch out when you see this! He often wears the tops shown on the picture followed by some shorts or jeans and black and white worn trainers. Sometimes you will see him wearing a red hoodie and some sunglasses Becuase accourding to Hiro "Ladies love the bad boys!"

Personality: Hiro is your resident class clown and goof-ball. A hyper-active 14-year-old pokemon trainer, he is always quick to joke and comment lightly upon any situation that he would find himself in. Often extremely impatient and impulsive, Hiro possessed an inclination toward recklessness, often getting him into trouble. Because of this, he loves to play pranks on people.

Despite his goofy nature, Hiro comes to care about the people he loves and would do anything to keep them safe and sound. He is serious when he has to be whether is is a problem or his mood.

He also loves to eat food and is strong, despite his appearance.

He is intelligent, having studied pokemon as well as education for years and would be the first to know something about anything.

Hiro also pocesses a trait where sometimes he would show no mercy, and continue doing something from pokemon battles to pranking someone, sometimes making him dark, aggressive and violent at times. Especially when he is mad, which he rarely is.

History : Hiro would prefer not tell his tale. Other then the fact, he studied pokemon for 4 years before becoming a trainer - the only reason he became a trainer later then he should've been. That and something else...

Starter: Shiny Zorura, male. Nicknamed Loki after the norse god of mischief, Loki is a prankster at heart and uses his ability illusion to aid his prankster ways and play pranks on people with his trainer, Hiro. Loki cares a lot towards his trainer, and does whatever he can to make sure he's happy. He also loves to play pranks on Hiro and embarrass him, but makes it up to him in the end. Loki would also not like to tell you about his history, because he is a lot like his trainer and he doesn't know. He can talk and laugh in people's heads and loves to eat. When Hiro sometimes gets out of control, Loki will cower in fear and try to calm him down, disobeying an attack order if given to him
Last edited: Mar 17, 2015
H

Personality: Kay is a very reserved and private person. Though not exactly the friendliest of people, he doesn't go out of his way to make enemies. He's cold and calculating and makes his best effort not to draw attention to himself.

History: Kay started his Pokemon adventure several years ago at the age of eleven, his first Pokemon being the Eevee he has had since. Although it was the Pokemon League that had inspired him, it was a Team Rocket recruitment officer he met in the Cape of Cerulean that truly motivated him. He's been a member ever since. During his time with Team Rocket he's learned many things about business and how to apply his Pokemon to achieve those ends.

Starter: Eevee. A Pokemon almost as serious as its master, it focuses on his commands obediently. Despite its master's belief that Pokemon are weapons, it has formed a powerful bond with him. Some might even call it a friendship.
H

Accepted, but the players will likely be fighting Team Rocket. Just FYI.