Ramblings of a rambunctious clown 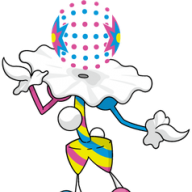 As you might have noticed, lately there's been a push to introduce gender neutral way to mention people. That's generally a good thing and for the most part it's happening without a lot of issues ... except when it comes to mentioning things from languages like Spanish. The most common word that hits this snag is, of course, Latino (with the female counterpart Latina) - often rendered in a gender neutral way as [email protected] or Latinx.

I've seen a lot of posts on the Internet about this topic that basically amount to "It's white people virtue signaling, no actual Latino uses it. Spanish has gender, and trying to change the language because you're offended is a bad thing." This needs some - OK, it's more like a lot - of unpacking and here's my attempt at it.

1. Is it virtue signaling? Or perhaps the work of the White Savior

?
To be fair to those people, I do agree that there's a lot of virtue signaling involved in the process, and the concept that third parties can dictate what a certain community calls themselves is ... not exactly a good thing in my books. And in fact, a number of people have been receiving hate for not using the construct - mostly by white people - so yeah, that's not ideal.

I do agree that the community's wishes should be respected, and for the most part I do think that there isn't an intrinsic need to neutralize words like Latino, but, there are some important caveats that people miss all the time, which lead to some bad rhetoric relatively often.

So here's in no particular order a list of common arguments I see and some counter-arguments:
Now that we're done with the small fries, there are two arguments that need more attention.

2. The language is sacred
The main argument people like to make is something along the lines of: "It's the way the language is, you shouldn't change it because you don't like it!". While it certainly doesn't need to be changed, this argument reeks of linguistic conservatism which is just ... meh.

Languages change all the time, and that's fine. In fact, that's the reason dialects exist - the language is changing in different ways in different places but it's still similar enough that those people can understand each other.

While there hasn't, to my knowledge, a politically motivated change to the language so far - except perhaps for the efforts to "keep our languages pure" from institutions like the Real Academia Española and the Académie Française - there's no particular reason that can't be the case. At the end of the day, as long as the changes can take root the language will change to acomodate them, and that's fine.

In fact, it's not particularly hard for noun classes to phase themselves out of existence on their own. English did it, for one. Swedish merged its masculine and feminine noun classes into a "common" class. Heck, Latin had a third class (neuter) that was subsumed into the masculine one when the Romance Languages were born.

While these changes often happen due to sound changes making them more or less indistinguishable for a lot of words, a political push to use gender neutral terms to humans could easily fossilize into a "human" or "neuter" class to contrast "non-human 1" and "non-human 2".

As a bonus: in case you're wondering what sound change could get rid of gender in Spanish and Portuguese - we have a documented one in a living language: Russian! There an unstressed "o" sounds like "a", so if this sound change happened in Spanish, a lot of pairs like "niño / niña", "maestro / maestra", "alumno / alumna", etc. would sound the same.

The articles would also sound the same, so at that point, gender would most likely cease being an interesting way to analyze Spanish grammar.

3. It's fugly.
To be honest, I can't really argue against that. Using x or @ is terrible from an aesthetic standpoint. While I hope I don't have to spell out why this isn't a great argument, the fact of the matter is that a very alien change will make its acceptance grow a lot slower than it should. Optics matter.

In Brazil, a common alternative I see is the use of "e" to mark a third gender, so you'd have "aluno, aluna, alune" or something of the like, meaning something like "male student, female student, student". Personally I think it looks a lot more natural and could even pass for Italian or something.

That said, there are some issues: "e" can't be an article since it's also the conjunction "and"; some words traditionally seen as male like "presidente" already end with an "e", the male pronoun "ele" (he) already ends with an "e" and so on.

There's probably a laundry list of reasons it's not perfect for Spanish either (and it's certainly not good at all for French) but still, I think it has a lot more chance of catching on than "@" or "x".

4. Conclusion
While it's fine to prefer a familiar term and this is the kind of thing that the community's wishes should be respected, in my opinion, it's important to keep in mind that by maintaining the status quo you're implicitly allowing biases like "men are the default" or "non-binary isn't important for inclusivity" stand unchallenged.

So, it's important that you make sure that you're working with these people to find alternative way to include these groups instead of just saying "It's the way it is, I'm not changing it" and not doing anything else to solve the problems.

And uhhh, sorry for the long post on a somewhat heavy topic for my first blog entry but this has been bothering me for a while now.

Why I think Gen 9 Shouldn't Happen This Year

The sound of your voice?