McDonalds in the United States has partnered with Pokémon to release a special Happy Meal as part of the 25th Anniversary celebrations for the Pokémon Franchise.

This year's McDonald's Collection set of Pokémon Cards features 25 cards, reprinting all feature starter Pokémon from various Pokémon TCG expansions from the Black & White, XY, Sun & Moon, and Sword & Shield Series in both Non Holofoil and Confetti Holofoil versions. Each card retains its original layout, with the 25th Anniversary logo in the bottom right corner of the card's artwork. Each Happy Meal includes 1 packet of 4 random cards, with one card per pack being a Confetti Holo.

The real test for anyone wanting to catch these Pokémon cards and toys won't just be how far and wide you're willing to travel across the land however. In a sad addition to the list of why we can't have nice things, the rollout of these Happy Meals has been marred by reports of scalpers and overzealous adult collectors snapping up all available stock. Unhappy customers have taken to Twitter and other social media platforms to complain about other customers buying Happy Meals in bulk, leaving many stores without any stock for younger fans.

On eBay, scalpers have already been spotted selling the Happy Meal envelopes at a significant markup. Shockingly, not only are many of these listed as "Sponsored" listings (where eBay receives a large commission, potentially upwards of 50%, for each sale), but multiple listings have been offering factory sealed cases of cards, suggesting either McDonalds staff are selling toy sets in bulk to customers not even purchasing Happy Meals, or some scalpers may have illegally obtained Happy Meal packs for sale. 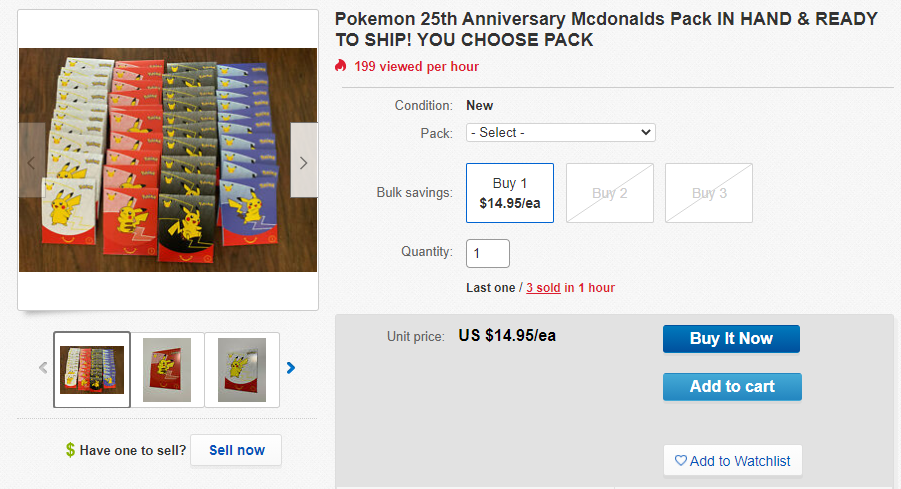 While a number of McDonalds stores have now implemented inventory controls to allow more people to have a chance to buy Happy Meals, this will be of small comfort to the many families and children who have already missed out on the opportunity to get their hands on these packs at their preferred local store unless these inventory control are adopted nationwide and accompanied by additional distribution to those stores which scalpers have already cleaned out.

A likely contributing factor to the rush on these Happy Meals by scalpers is the continuing spike in popularity of Pokémon Trading Card Game products. A complete set of the original Base Set recently sold for $660,000 USD.