So, this new episode marked the beginning of the next season. That means a new opening. It was okay, in my opinion, but I almost would've rather had them keep the one from Season 17.

The episode itself was good enough, though; some of the interactions between Serena/Pancham/Chespin/Nini/Smoochum/Farfetch'd were funny, as well as Clemont's profuse apologizing.

This episode was okay, though I really only liked the first half.

First off, I'm officially done with Chespin and his annoying as hell food stealing. I can't imagine why Serena stopped Pancham from scolding Chespin and said it was okay when he rightfully deserved it. Speaking of which, this scene right here made me appreciate Pancham a little bit. He's not bratty like in his debut and actually calls Chespin out on being a jerk. If he keeps acting like this I might just start to like him a lot. And I was so glad when Clemont had that...whatever invention dance with Chespin and promptly blow up in his face.

Moving on to Nini (who I'm guessing mentioned her name off screen along with the others since they knew each others names out of nowhere later on), I thought she was okay, but she just kinda seemed...there for the most part after her performance. Also her lips and expressions creep me out. But her Pokemon I loved. They had actual personalities, which is rare for CoD Pokemon, and I loved how they did this with less popular Pokemon, especially Farfetch'd who I adore. I didn't expect Smoochum to develop a crush on Pancham so that was pretty neat to include. (And I guess it also means Pancham is male, something I really couldn't figure out). I liked all of the performances, including the little dance routine from Pancham and Smoochum. Serena's was definitely my favorite; Pancham should wear his glasses over his eyes more often.

And then TR sport off probably the ugliest disguises ever for their little plot. Well, if there was one thing I liked about them today, it's that they referenced Jessie's love of Smoochum. Okay first Chespin wants to do a Performance routine, then he wants to practice dancing. I seriously hope he doesn't get that interested in performing that he actually wants to enter a Showcase. Anyway, as expected, Pancham and Chespin put aside their differences to stop TR and I'll admit that they had some damn good teamwork, combinations, and crafty methods of attacking. That was probably the second highlight of the episode after the performances. But the one time I would have liked to see something cliche, Pancham and Chespin go right back to fighting after they beat TR. I hoped they would have become friends, but no. I really hope they don't have another "2 Pokemon on the main cast rivalry" for the rest of this series.

As I said, this episode was okay, but I would have preferred more actual focus on Serena and her performance instead of Pancham and Chespin bickering. Though this episode did make me start to like Pancham, showed off some pretty cool performances, and had a CoD with interesting and entertaining Pokemon. So all in all, I think I'll go with and 8/10 for now.
Last edited: Feb 7, 2015 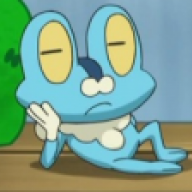 Ughghghghghghg I can tell I'm really going to despise these "showcases".

Also, nice to see a Farfetch'd in the show again.
C

With all due respect (and even taking into consideration how pointless their appearances have been as of late), I really have to question why Team Rocket choose to reveal themselves the moment they've captured the protagonists Pokemon. You'd think that'd only result in them getting defeated immediately.

Serena: Hold on! I thought we were having a lesson!
(Team Rocket grin sinisterly and throw off their disguises)
Jessie: Prepare for trouble, a lesson it is.
James: And make it double, you're in th-
Ash: Pikachu, use Thunderbolt!
James: Huh?
Pikachu: Piiiiiiiika.....
Jessie: Hey! We haven't finish our mot-!
Pikachu: CHUUUUUUUUUUUUU!!!! (zaps Team Rocket)

New theme is eh, I'll get use to it and grow to like it.

This COTD freaks me out, really really dislike her design.

What in God's name is that invention

I don't see the difference between this and a contest appeal

How in the hell did Jessie get her hair that short. Don't say she cut it because it'll be long in 4 minutes. ...or 30 seconds

Alright episode but bleh filler. Didn't even have a debut so :\

The effects of climate change on Australia’s only endemic Pokémon: Measuring bias in species distribution models

Review Full summary and episodes of all of the Pokemon anime