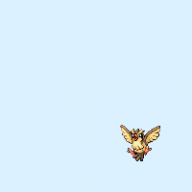 I started with Chespin, and he stayed on my team through the entire game. I still use him a lot now. He's one of the most reliable Pokemon I have, despite his problem with weaknesses.

I was thinking. Does anyone else feel that the Kalos Starters signature moves are severely lacking? I thought of their upgraded versions, that would be much more fitting:

Water Shuriken
The user hits the target with throwing stars three to five times in a row. This move always goes first.

The user attacks by breathing a magical, draining fire. This also lowers the target's Attack and Sp. Atk stat.

Spiky Shield
In addition to protecting the user from attacks, this move also damages any attacker who makes direct contact.

-Targets now lose 1/4 of health upon contact
-Can be used twice in succession, successfully

-Increases Defense by one stage


Or would these be too broken?

Having Spiky Shield work twice in a row with 100% success would be a bit broken, I think. With increased damage as well, very broken. It can work twice in succession sometimes as it is, and it already feels allllmost broken to me. I do love it so, especially with Leftovers and Leech Seed.
J

I started with Froakie, cos Greninja looks baddass.
R

Fennekin all the way! I got disappointed about its final evolution, though...
S

Making Spiky Shield more powerful would be broken, esp. given how Chesnaught already has a painful combo available in Spiky Leech Seeds.

Water Shuriken doesn't need a power boost; it already gets STAB (Protean or otherwise) and remember, it's an increased priority move.

Mystical Fire is on par with other moves that always lower a stat upon hit, like Snarl or Icy Wind.

Water Shuriken doesn't need a power boost; it already gets STAB (Protean or otherwise) and remember, it's an increased priority move.

Mystical Fire is on par with other moves that always lower a stat upon hit, like Snarl or Icy Wind.
Click to expand...

I see your point with Chesnaught, but it may not always have the time to set up Spikes (or they could be blown away with Defog etc), the same with Leech Seed. I was just referring to the move on its known, without assistance from other moves/hazards etc?

So then is the 3-5 hits decent then? For Water Shuriken? And if it was 2+ it could outspeed Talonflames

True, but Delphox never uses it competitively...I thought it was stronger it would be used over Flamethrower, and maybe Fire Blast...

As a player who doesn't like multi-hit moves normally, I'd have preferred for Greninja to have a Surf/Flamethrower-like powered move. A signature move that is middle strong and 100% accurate. Those are also my favorite types of moves.

You'll outspeed Talonflame most of the time with Water Shuriken anyway, since the majority of them run an Adamant nature making +2 priority pretty unnecessary. Water Shuriken's power is fine for a priority move, it only seems underwhelming because of Greninja's middling 95 attack.

I think Mystical Fire would be more effective if it was more powerful, but in exchange only lowered Sp.Atk say, half the time (like an inverted Fiery Dance). That way you could viably run it as a main STAB option alongside Substitute or Calm Mind. Then have it always lower Sp Atk on a burned opponent to give it some synergistic possibilities, a set of Substitute/Will-O-Wisp/MF/Psychic could be pretty annoying to deal with.

Not that one move could solve all of Delphox's problems, but it's a start.
R