Tell us why you Love Your Favorite Pokemon!

I don't have one pokemon that is my absolute favorite, but rather I have several that I love but I don't think I can choose one over the others. Would be like choosing between my fingers lol IDK but my top 3 pokemon are:
-Gengar. Because back when I was a little boy it was the only ghost and I really liked the ghost type even back then. And I had a small Gengar toy that was translucent and I just loved it so so much. And then the anime also made me love Gengar, and the theories about it being Clefable's shadow and all that. I find it very charming despite the nightmare fuel pokédex entries it's given.

-Espeon: I love this pokemon to bits, I find it's design so appealing, like it's sleek, elegant, charming and so nice, I love its color and I always liked Eevee as a kid but Espeon stole my heart as a teenager when it came out, it's so beautiful.

-Lucario: well obviously I love this pokemon, I first saw it back in the movie about it and Mew and I love it so much because of the design and concept, and it's super useful in battles in the games, it can be anything (physical sweeper, special, mixed, etc)and has a vast movepool and it's so cool. I also like the supernatural aspect of it reading auras and stuff.

Golurk. If I haven't made it completely obvious.

Back when Gen V was first released and the entire Unova Poke Dex was leaked, I was on the fence about the games. What I had seen didn't grab my interest. Then my husband proceeded to show me every last Pokémon from Unova. I cracked a couple of jokes about some of them, then my gaze fell on one particular Pokémon, one that hadn't been seen in the pre-release news. It was an odd, aqua and teal robot with a seal on its chest, sigils on its hands and shoulders and yellow eyes. I stared at it in complete and utter awe.

"Is that... a robot?" I gasped. My husband shrugged. But I was in love. This Pokémon was everything I had ever wanted. I needed it on my team, like I needed air to breathe.

That was how it began. One chance look and I had found my favorite. When I got to the Dragonspiral Tower, I caught every Golett I encountered, then carefully combed through the PC boxes to find the perfect one for my team. He was Brave with Iron Fist and I named him Riser.

I still have him. He's safely tucked away in a PC box on X; I'll send him to Ultra Moon shortly, get him yet another Ribbon and get him ready for Sword. He's at level 100, EV trained and my baby. I adore him.

To this day, I have to have a Golurk on my team. Those big lugs are my anchors, after all.

I love Bellsosom, thanks to her apparence, and because it's kind like me, so I incarnate her personality. 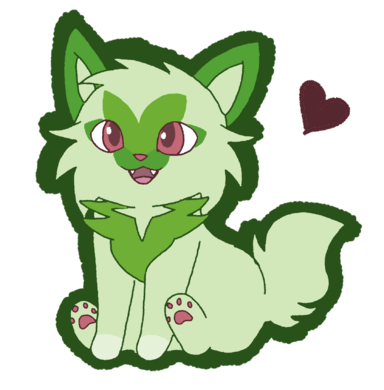 Choosing a favorite for me is like having to choose a name for a character. I can never find just one I love above all others, and I find that often my favorite switches. And with all the recently added Galar Pokemon, I have to see where those ones fall into the mix.

Here is one of my favs though.

Torracat - I loved Torracat from the moment I first saw it. Very few Pokemon have ever hit me like that. Often, my love for certain Pokemon grows over time, but for Torrey it was instant. Its art was cool, but seeing how it looked in-game, with the clash of the green background to its fiery red fur stuck out in my mind. The way it simply moved was cool to me. Torracat didn't just seem like a fun Pokemon to battle with either, it seemed like it would make a great partner Pokemon. I could easily see a Pokemon universe version of myself, writing stories about the Pokemon World with a Torracat in my lap. I love this fiery little cat because of how much fun I think it would be to raise my own, if I lived in the Pokemon world.
You must log in or register to reply here.
Share:
Facebook Twitter Reddit Pinterest Tumblr WhatsApp Email Link
Top