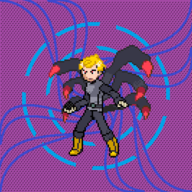 Not gone yet, don't know how much longer I'll be around, might as well have a little more fun before I go.

And if you take issue with a type matchup and want it changed, I would like you to go elsewhere. This is not a place to complain about how you are dissatisfied with the world of Pokémon; it is a place to theorize in regards to the motivations behind it.

To open up the thread, I would like to share a few motivations that are not mine, but that I largely agree with.

Gags and goofs about videogames and the things that happen in them.

Some other associations regarding type matchups that I have heard others' confusion over.

Fighting moves > Normal Pokémon: the Normal type is largely rooted in mundanity, whereas the Fighting type is based in martial arts, which require skill. Put your average Joe - even a really beefy Joe - in a fight with a martial artist, and nine times out of ten, the martial artist will come out victorious, just because skill means that much in a fight.

Dragon moves < Steel Pokémon: setting aside the fact that Steel seems to be specifically designed as the most defensive type in the world, the classical fantasy is "evil dragon struck down by a knight in shining armour". (I'm tempted to blame anyone's failure to understand this association on the increasingly fewer heroes in modern fantasy who are heavily-armoured.)

Fairy moves < Fire Pokémon - but Fire moves = Fairy Pokémon: the Fairy type is largely rooted in fairy tales - and in many fairy tales and myths, fire is often associated with an obstacle standing between the hero and their success. But at the same time, it is no respectable fairy tale that doesn't end with their obstacles being overcome, and so the fire is but a temporary setback, not an insurmountable adversity. In the same vein, stick with nothing but STAB, and your Fairy-type will often suffer against an enemy Fire-type - but diversify your moveset, and you can overcome.

Characters from other franchises as Pokémon

Anyone else feels psychic is completely outclassed by fairy? :(