henrymidfields said:
I haven't resumed playing Conquest yet, but once I update my LP, and complete Chapter 18 there tomorrow, then I will start playing Chapter 19.
Click to expand...

Alas, I couldn't get around to update the rest of Chapter 18 in its entirety. But I've done the gameplay part now. My run for Chapter 19 will have to wait until the weekend.

World of Final Fantasy (PS4) - Beat the final final boss and was watching the ending cinematic when all the power in the house went out. So after raging a bit and a few cups of coffee I went back and re fought all the ending bosses and finally got the true ending! Now I can take Reynn and Lann out of my stacks and go finish up all the extra stuff that comes post game like the 4 new dungeons!
S

In Monster Hunter Generations, I am now 2 to 0 in Prowlers vs. Elder Dragons.

First, we took out a Kirin in the Jurassic Frontier. Had to make a few retreats back to camp to restock acorns, but we finished it off.

Then we took on Shagaru Magala, and the battle that followed was even more epic than it was in MH4U. 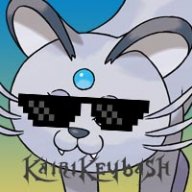 Mario Party: Star Rush. My Brother and I are having a good time playing it together.

All right, Chapter 18 of Conquest is all updated and complete! (Click the link on my signature for the latest update.) Now onto the Marvel crossover episode of Chapter 19!

Pokemon Moon - I can go to the first Island trial now. But I'm just running around doing other nonsense first. Cant decide if I'm happier about my Rowlett or my silly Rattata!

sun.
I already know the spoilers (thanks hackers, you could've waited until release you know)
but I want to see if most of them are true.

Pokemon Moon
On the 2nd island. I really want to evolve Rowlet but I keep holding back because it's so cute >.<

The Last of Us - Currently in Winter. I'M COMING FOR YOU, ELLIE!

Virtue's Last Reward - The first decision I made in the game was to Ally with Alice, who Betrayed me and I've hated her ever since. Now I'm exploring other routes and Phi Betrayed me! You Allied with me in the other timeline, I thought we were friends, you bitch! Also, I've solved every puzzle in this game so far on Hard mode, in one sitting, getting the secret passwords every time, so I feel pretty smart when I play this game.

Persona 3 FES: The Answer - Finally decided to get into The Answer because I missed these characters so much. The story is good from what I can tell, but it's spread painfully thin in the middle of SO - MUCH - GRINDING. UGH. Folks really aren't kidding when they say this about The Answer. I like Persona 3's combat, but not this bad of a ratio between grinding and story development!

Nier - I haven't played this in like a month - whoops - but the last thing I remember doing is going to the junkyard place and beating up a bunch of robots, and now I'm gonna look for somebody's mother.

Metal Gear Solid - Also have not played this in like a month - whoops. Last thing I remember doing is switching to Disc 2, now I think I'm just en route to the hangar where the Metal Gear is being held.

It's back to minecraft for me. My inbetween games game.

I think I'll try play a wii game next. Get some exercise

Pokemon Moon - on the second island. Hopefully the second island trial is more impressive then the first. Right now my team is Rockruff, Yungoos, Cutiefly, Trumbeak, Crabrawler, and Dartrix.