What will remind us of the fourth generation?

What will remind us of the fourth generation?

I cannot say for certain. I don't really expect anything, yet I know that some revolutionary new concept is going to be added.

The third gen also introduced Abilities and Natures to us, and I've seen far more fans of the second gen than of the first gen.
E

I am mainly discussing the point of view from Gamefreak's side as opposed to the side of the fans. I have seen a rather equal spread of fans when it comes to the first generation and the second generation, but I find it indisputable that the first generation has left more of an impression on the franchise than the second generation considering that from a cursory inspection, the format of every subsequent handheld game has mirrored that of the original Red and Green.

I do agree, however, that abilities and natures are here to stay.
D

Could we be seeing more than fifty TMs?
Click to expand...

I both doubt that and the point in it. You don't need more than 50 - and move tutors can cover the TM-only moves from the 3rd Gen lost in the transition, just like the G/S/C ones eventually were.

Perhaps a better variety of climates?
Click to expand...

I'd also like to see this, and I can only hope that the extra welly behind the DS gives Gamefreak the chance to expand on the idea kicked off in R/S - where it was used extremely poorly.

Even some more varied HMs that aren't all Water moves?
Click to expand...

Lol. I fully support the "Get rid of Waterfall and Dive" campaign.

Doctor Oak said:
I both doubt that and the point in it. You don't need more than 50 - and move tutors can cover the TM-only moves from the 3rd Gen lost in the transition, just like the G/S/C ones eventually were.
Click to expand...

The purpose of this is to keep moves that were breedable in the third generation breedable while adding the option of making such moves as Crunch and Magical Leaf become more proliferated in their compatibility amongst Pokemon. I'm hoping that either this or the prospect of more move tutors that teach you moves more than once for a price will occur.

But in all seriousness, the DS provides an infinitude of possibilities, especially with the terrains and the HMs. Say, if such things as seasons are implemented, a new Fire move could be branded into an HM that would allow you to melt down expanses of ice. A Grass HM could allow you to swing from tree to tree within a thick rain forest. An Ice HM could allow for the formation of a bridge to span over faults and canyons. Even from these examples, it is evident that the sea doesn't have to be the primary medium of interaction besides the land.

I will agree with you on that. The first gen provided the core on which pokemon was built. We all hope that this doesn't get altered, or at least I do. It is what makes pokemon so precious to us.

I am not big on speculation. Whatever it is they make, I'm sure it will be an interesting twist on what they have already done. 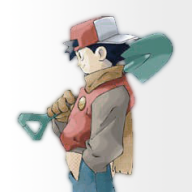 I can definately say that this is a really well-made article which problemise me. To begin with it's for sure that the "basic" idea of Pokemon was introduced in the first generation. All the "about what is Pokemon" could be answered by them. Trainers had been excited with all this and kept playing all-day-long. After 3 years of the first generation, the second generation of Pokemon started. It was for sure a big success, things that made Pokemon more "reactive", things like genders and breeding, were introduced. New options were invented and the trainer was able to have an even bigger journey with more quests and interest. Taking the big success of the games of the second Generation, Nintendo took the chance and continued. The third generation, keep making Pokemon more "reactive", it introduce the natures, abilities, and generally more options to be a "breeder". Except the breeders it also worked well for trainers. Efort Vallues, and Individual Vallues, started to work and making Pokemon more complicated and interesting. However, there were still some people that did not see the additions, and believed the third generation as a Nintendo's "Pokemon is well-known now and we will make money". Despite that fact, countless yound trainers were still getting into Pokemon, keeping the flame burning. Continuing with the third generation, Nintendo had FireRed and LeafGreen out. Despite the general, not-so-possitive opinion about Pokemon, from the "big" now, old fans, the remakes of the old games were successfull, even if no big changes were made except the adding of some mini games, and the wireless connecting; the old fans' mania was awoken in some way.
I believe that more things than just "memories" from old generations, are keeping the Pokemon still on. It's not the new features of the games, it's not the new Pokemon introducing, it's nothing like that. It's just that they are now inside us. Past or future does not matter, just be sure to enjoy the present of this phenomenon. It's for sure that Diamond and Pearl will fullfill our wills. Online features, new Pokemon, more options. Everything. But be sure to feel it rather than playing it.
Because Pokemon is not a game, it is a lifestyle.
R

Personally, I'm looking for more improvements in battling. Perhaps a bunch of wild Pokémon can attack at one time, and more than one or two Pokémon can be sent out against them. (Not in official trainer battles, of course.) Heck, I could go with a Golden Sun-esque interface. That would make the graphics rather more...graphical, and vivid.

There's also terrain, which has so much more potential than Nature Power. It could be something like this:

Location affects climate. (For instance, it may always rain south of Fortree, but it's a oceanic sort of climate near Pallet Town, which means mild weather all year. The desert is always either sunny or sandstormy, and rarely rains--*nudge*)
Location affects terrain. The desert is sandy, if you're on water, you're on water, if you're in a city, you're on cement.
Season, climate, time of day, and chance affect weather.
Weather affects the terrain. (For instance, rain + dirt = automatic Mud Sport.)
Weather, time of day, climate, and terrain affect battle.

There wasn't any talk about the 2nd generation's addition of Shiny pokemon, Wandering Legendaries, and outbreaks of pokemon - all of which carried over into the 3rd generation. The only thing I can think of with these three that might be eliminated is the outbreaks. Most of the outbreaks aren't really emphasized and those that you do get aren't all that great. Outbreaks, headbutting, Long vs. short grass appearances, all features of capturing pokemon in the second generation are viable, yet overlooked methods of capturing pokemon in the 3rd generation.

Also with the 3rd generation, don't forget Spinda. what otherwise would've just have been a bland, no-nothing basic normal pokemon turns into a huge possibility for the 4th generation. Think of hues/patterns changing depending on IV and/or gender stat, or just being randomized in general. This allows for another level of personalization of a pokemon besides its name, moves, IVs, and EV spread.
E

To comment on part of my article's motives, I would say that the change in the experience system will be felt for a good while to come. Besides inventing a entirely new metagame focused on sweepers, it will ensure backwards compatibility for some time to come.

If nothing else gets remembered, which I highly doubt, we'll at least remember some of the starters or legendaries.

There wasn't any talk about the 2nd generation's addition of Shiny pokemon, Wandering Legendaries, and outbreaks of pokemon - all of which carried over into the 3rd generation. The only thing I can think of with these three that might be eliminated is the outbreaks. Most of the outbreaks aren't really emphasized and those that you do get aren't all that great. Outbreaks, headbutting, Long vs. short grass appearances, all features of capturing pokemon in the second generation are viable, yet overlooked methods of capturing pokemon in the 3rd generation.
Click to expand...

I didn't discuss it because they didn't come to me at the time.

Shinies are undoubtedly bound to remain a relic of the second generation, but I didn't feel its noteworthy impact was anywhere as influencing as that of the whole breeding and move tutor system. True, shinies remain a collector commodity to this day, but when it boils down to the nitty-gritty, Pokemon is still primarily about battling, and both the move tutors and breeding system promote the furthering of this potential to its maximum capacity. Wandering legendaries have endured the test of time as well, but do we connect that as strongly to the second generation as much as breeding or even shinies? While they are two ever-the-present features, the breeding system is a enduring and more established feature than the wandering legendaries, which are only invoked for a portion of the time.

Also with the 3rd generation, don't forget Spinda. what otherwise would've just have been a bland, no-nothing basic normal pokemon turns into a huge possibility for the 4th generation. Think of hues/patterns changing depending on IV and/or gender stat, or just being randomized in general. This allows for another level of personalization of a pokemon besides its name, moves, IVs, and EV spread.
Click to expand...

I would have to agree there, Spinda will certainly be remembered as a testament to the technological prowess of the third generation in a way similar to Unown, but with much more variability in its patterns. I could foresee this capability being extended further to make Pokemon more unique and one-of-a-kind, even among members of the same species. This might be a bit ahead of the time, but my Sandslash might have longer claws but shorter spikes in comparison to your Sandslash based on the factors you mentioned. Hmm, perhaps this could even act as a secret indicator for your Pokemon's IV total: the size of your Pokemon would be greater the higher its total IV count is, for instance, while a certain feature/s could be more prominent to indicate which EV is the highest. I like the potenial here.
P

Yes, shinies are more of a collector's commodity, and I understand your article's motive to focus mainly on battling and increasing that system.

As for you mentioning EVs, I actually wrote an article like this way back before emerald came out (because I wrote about spinda back then, also - or was it back in GSC about unown?). I thought of indicating EVs, but ultimately thought it might be too much. Since IVs are static and EVs are dynamic (even more so with the EV berries), I would think it'd be too much.
I'd think this would be more like spots and patterns more than physical features just for ability to be able to use a template outline of a pokemon and move hues/spots within that. Otherwise there'd be so many additions/redraws to the outline of a pokemon that it would be a lot of outline-varieties for just a single specie.
You must log in or register to reply here.
Share:
Facebook Twitter Reddit Pinterest Tumblr WhatsApp Email Link
Top